The Girl with the NSObject Class Reference tattoo

Most of the proactive computing is performed by tattooee Lisbeth Salander. She is one of a rare breed of computer specialists, first identified long ago by NTK of blessed memory. When confronted with an encrypted file, instead of saying 'oh bugger, it's encrypted' as you or I might, Lisbeth says 'it's encrypted, this may take a little longer'. Naturally, all software security protection falls apart at a touch of her gently probing mouse cursor.

Frk Salander is said to have 'loads of tattoos' in addition to the famous dragon. Perhaps 'Lisbeth' is another infelicity of translation; she would surely have been more aptly named 'Lydia'. I wouldn't be surprised if part of Lisbeth's expertise comes from having an ASCII character chart - Swedish cøde page, natch - inscribed above her elbow, or a BNF description of C# etched into her left shin, to save time googling it up in a crisis.

What am I talking about? C#, indeed. Objective C, that would be our Lisbeth's pleasure.

Personal note to Dell marketing department: if the studio offers you product placement in the forthcoming Hollywood treatment of this book, I suggest you demand script control or take a pass.

Henning Mankell's book is a quaint, nostalgic look back at the very early days of the computing - ie ten years ago - masquerading as a eco-terrorist thriller. The text was originally written in Swedish, but has been translated into idiosyncratic English for the convenience of Anglophone readers.

The translation is much fancier than that of TGWTDT, for example using the word 'enormity' to mean 'wickedness' rather than the consequence of excessive embiggenation, and employing the word 'murder' as a collective noun for crows - something I have never previously seen done except as a joke. 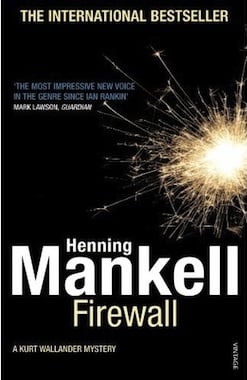 From a technical point of view, the book is disappointing. I looked in vain for even basic firewall advice, such as blocking off every port except 80, or enabling NAT. The novel's text specifies that the protagonist has no interest or understanding of computers at all, except that they have freed him from the need to apply Tipp-Ex to corrections, and I rather suspect this goes for the author too. Despite being at the centre of the plot, the computers are entirely generic: they may be Macs or PCs or even late-flowering VAXen for all we can tell.

Here is what happens.

There are 10 types of people in the world, but there is only one Melvyn

Stob Verity puts a Bragg in your shell-like

A treat for Quizlings everywhere

Stuck in a dull conference? You need Verity's survival guide

Stob Getting your own back on technical seminar speakers

Proper boffins make your company succeed, even if you're not very technical

Engineering, not biotech or web upstarts - that's what powers biznovation

The Sons of Khan and the Pascal Spring

Stob How Embarcadero made Delphi as groovy as a Lumia phone. Um...

Riders of the Bearded Sage

Stob Is that a dead parrot in your pocket, or are you just trying to please me?

How I Learned to Stop Worrying and Love IPv6

Stob Interview with a Flash Harriet