IBM's mainframe-blade hybrid to do Windows

IBM is rejiggering its hybrid mainframe-blade "system of systems" that was announced last July and that began shipping in the fall.

Big Blue is also providing details of the hypervisors, networks, and operating systems that will be supported on the hybrid configuration, which marries a System zEnterprise 196 mainframe with blade chassis equipped with Power and Xeon processors.

The zEnterprise 196 mainframe is based on the company's z11 processor, which has four CISC cores running at 5.2GHz implemented in a 45 nanometer copper/silicon-on-insulator process, and which weighs in at 1.4 billion transistors including L1, L2, and L2 caches; integer, floating point, and decimal units; and a slew of other features. (You can see El Reg's in-depth coverage of the z11 chip here and a discussion of the zEnterprise 196 system there.)

Six of the four-core processors are implemented on a System zEnterprise 196 system board, which IBM calls a processor book. Up to four books and 3TB of DDR3 main memory (including a RAID-like memory striping that Big Blue calls RAIM) can be added to a system for a total of around 50,000 aggregate usable MIPS.

The system can have up to 80 cores dedicated to running z/OS, z/VM, z/VSE, and z/TPF workloads, with the remaining engines used as co-processors to handle I/O and to offload Java, database, or Linux processing. If customers want more co-processors for running Linux, they can use some of the 80 engines that way, too, but specialty engines come out of the pool of 16 engines. 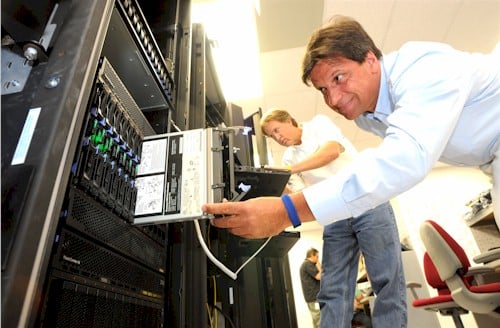 IBM engineers set up a zBX blade chassis for a System zEnterprise 196 mainframe.

In an effort to push HP, Dell, Oracle, and Fujitsu x64 and RISC/Unix servers out of data centers that have IBM mainframes at their core, Big Blue took a page out of its AS/400 playbook (and one that Unisys also uses to create hybrid ClearPath mainframes) and has coupled Power and Xeon blade servers with the zEnterprise 196 mainframes.

By doing so, the IT executives in control of mainframes can make a land grab and try to wrest control of x64 and RISC iron from the executives in charge of those silos. The idea is to keep the mainframe at the center of the data center and to extend the mainframe's legendary security and good (but arcane) systems management to these other platforms. But to get the benefits of this hybrid architecture, you have to use IBM Power or Xeon servers.

When the System zEnterprise 196 machine and its zBX blades were announced last July, IBM had two different models of the zBX. The zBX Model 001 was a special version of the zBX that allowed the device to attach to older System z10 mainframes, while the zBX model 002 had top-of-rack networking and integrated switching to link the newer zEnterprise 196 to the blade servers in the zBX complex.

The zBX put two chassis in a rack, and four racks could be linked to a single zEnterprise 196 for a total of 112 blade servers to act as co-processors for the mainframe. A zEnterprise "ensemble" is a logical cluster of machines that has up to eight of these zEnterprise-zBX nodes. The BladeCenter chassis can, by the way, also be equipped with IBM's Smart Analytics Optimizer and DataPower appliances.

The first big change, which IBM quietly announced last October, is that the zBX Model 001 has gone the way of all flesh. So if you want to create a hybrid mainframe-Power-Xeon cluster and manage it all from Big Blue's Unified Resource Manager software, you need to upgrade to the newest mainframe – which not much of a surprise, when you think about it.

The second big change that's coming with the zBX, according to Doris Conti, director of System z marketing at IBM, is that Microsoft's Windows operating system will be supported on the Xeon blade servers inside the zBX complex. IBM has hosted over 300 workshops with mainframe customers discussing the new hybrid system, and customers were not exactly happy that IBM was restricting Linux to Xeon blades and not supporting Windows.

"We heard the feedback and we very much intend to deliver Windows support on zBX," says Conti.

Since last November, IBM has been shipping the zBX Model 002 chassis with entry-level PS701 blade servers – single-socket blades with four-core Power7 chips on them. IBM has not been precise about when it would ship Xeon-based blades, and only committed last summer to putting Linux on those Xeon blades sometime in the first half of 2011.

You may be wondering why Windows and Linux support on the Xeon blades in the zBX didn't ship back in November with the Power-AIX blades. Jeffrey Frey, the IBM Fellow and System z architect who designed the zEnterprise 196-zBX hybrid, says that the Xeon blades are coming later because IBM's Power-AIX customers were the ones Big Blue felt would take to the hybrid computing model first. (IBM is also fixated on preserving its market share in the Unix racket against resurgent Oracle and HP.) The plan now is to get Linux support on Xeon blades out the door this year, and then add Windows support as soon as possible.

Frey said that IBM was not sure how deeply it would have to get into the operating system or hypervisor code to manage AIX, Linux, or Windows when it started the zBX. So AIX, which IBM has the source code for, and Linux, which is open source, were the easiest places to start. IBM didn't want to get involved with Windows until it knew what it might need from Microsoft in the way of cooperation. "As it turns out, there is very little of that," Frey explained to El Reg, referring to the need to get into Windows code to make the OS work on the hybrid system.

Frey also let the cat out of the bag on what hypervisor IBM is using on the blades. IBM's own Processor Resource/System Manage (PR/SM) type 1 hypervisor and its related z/VM operating system (which can function as a type 2 hypervisor) are used to dice and slice the zEnterprise 196. The company's own PowerVM hypervisor is used on the Power7 blades to carve them up into logical slices and to virtualize I/O on the blades. IBM has chosen a variant of Red Hat's Enterprise Virtualization (RHEV), the commercial-grade implementation of the KVM hypervisor for x64 iron, for the Xeon blades; this tweaked version is known as RHEV-Blue, predictably, and is made to cooperate with IBM's mainframe firmware. Power VM will support AIX 5.3, 6.1, and 7.1, and Conti says that if mainframe shops want to run the IBM i 7.1 operating system (formerly known as OS/400) on Power blades, IBM will consider it, says Conti. As for Linux on Power, Frey says there will be a need for it, but that Windows on Xeon blades is more important to get to market given the installed base of machines at mainframe shops.

Next page: It's the network, stupid
Page: