Supertrooper 'lectroplane to stay up a week at a time

A radical new US military drone aircraft, intended to cruise high in the stratosphere on days-long missions in which it would take on many tasks currently requiring satellites, has made its first flight powered by hydrogen. 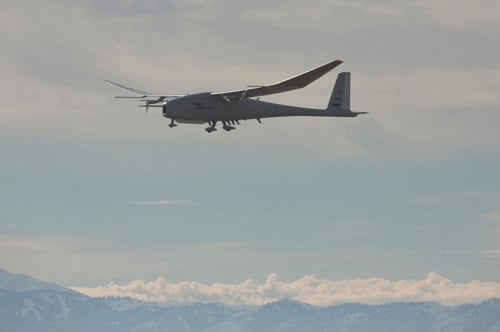 Throw away that clunky satellite dish. And the satellite

The Global Observer from famous aerial crazytech firm Aerovironment made a four-hour flight above the US military test centre at Edwards airforce base in California, according to a company announcement. The trial saw the aircraft reach 5,000 feet.

This "marks the beginning of high altitude, long endurance flight testing", according to Aerovironment. The Global Observer is expected to achieve cruising altitude of 65,000 feet and endurance of up to seven days. It will carry payloads such as the US military Joint Aerial Layer Network Tactical Communications Suite, which offer broadband IP communications to and from from small, portable ground stations lying within the vast footprint covered by the high-flying drone.

One of the various US government agencies paying to develop the Global Observer is the Special Operations Command (SOCOM), the umbrella organisation controlling America's various secretive military elites - Green Berets, Navy SEALs, Delta Force, "The Activity" and the rest. Generally a spec-ops team operating beyond regular radio range in Afghanistan - a frequent occurrence due to the mountainous terrain common there - has to use satellite communications, which for anything other than minimal bandwidth requires a cumbersome dish antenna.

Special-ops units are known to avoid this problem on occasion by working with ordinary communications-relay aircraft of various types: for instance the British Nimrod which crashed in Afghanistan in 2006 was performing this mission*. But keeping large aircraft like the Nimrod - or even smaller, less costly ones - airborne round the clock is an expensive business, the more so as ordinary aircraft can't fly very high and thus offer less coverage of area.

Aerovironment believe that the Global Observer is the answer to this problem. As it is able to stay up for seven days, just two drones will be required to keep one constantly on station: and the 65,000 foot altitude will mean that a small number of Observers on station will cover a large area of ground.

The Observer is propelled by four propellers driven by electric motors: these can be powered by onboard batteries - in fact the Observer has already flown on battery power - but this would not suffice for long-endurance missions. The craft's main special sauce is its hydrogen-powered generator, reportedly based on a fairly normal combustion engine, which supplies power for both propulsion and payload.

A two Global Observer system would provide persistent satellite-like coverage over any location on the globe at a fraction of the cost of satellites.

The company adds that the aircraft's immense range mean that it is quite practical to base them "out of theatre" - no need to put ground support personnel into Afghanistan or wherever, the Observers can fly in and out from a nice safe place thousands of miles away.

According to Aerovironment, "six [unnamed] US government agencies have provided more than $140 million in funding for the program". Most of this funding would appear to be from SOCOM: the secret supertroopers, according to federal records, had assigned $108m to the project as of 2007.

There is as yet no timetable for the hydrogen-powered strato-satellite craft to actually enter military service. At the moment the project has "technology demonstrator" status only. However, in the secret special-ops world, such kit sometimes gets put into service a lot more quickly than it would with the regular forces. ®

*This was made clear by the presence aboard of a Parachute Regiment corporal and a Royal Marine, neither of whom would normally be part of a Nimrod crew. In fact the two men were special-ops troops, most probably serving with the SAS and SBS respectively: it is standard practice for UK special forces to attach their own communications/liaison personnel to other units they may be working with on operations.

Something for the Weekend Hello customer, can I help you? Ha ha, just kidding, of course I won’t
Software12 Aug 2022 | 24