Comment In a world-gone-topsy-turvy moment, the BBC has been accused of virulent anti-green bias by advocates of electric motoring, including Kryten from Red Dwarf and - of course - famous battery-car manufacturer Tesla, maker of the iconic Roadster. 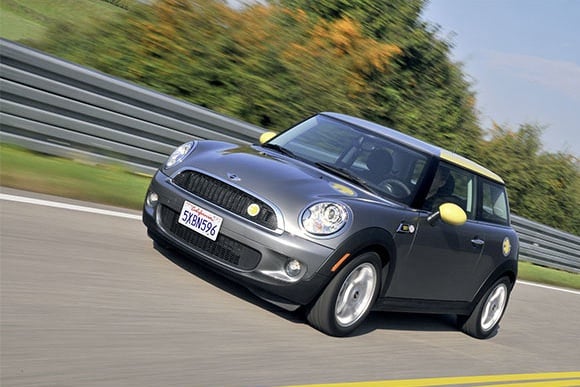 Don't try doing an Italian Job in one of these (maximum load 195kg including driver and passenger).

The Beeb coverage which has Robert Llewellyn (the actor who played Kryten, also well-known for revealing his intimate personal details on Twitter) and Tesla so wound up is this effort last week from BBC business journo Brian Milligan. Milligan decided to drive from London to Edinburgh in a battery-powered car, to see how long it took and how easy it was to do.

The car obtained by Milligan was a "Mini E", a Mini with its normal propulsion (engine, gearbox etc) replaced by a comparatively cheap, low-performance electric drive train. You can't buy a Mini-E; forty of them were made by BMW and leased to users (for £330 per month including insurance and maintenance) in a beta-test project of the sort common in the alternative-vehicle-tech world.

To cut a long story short, Milligan finally nursed his 'leccycar into Edinburgh on Friday four days after setting out, having achieved average speed (over the time spent driving and charging) of six mph. The journey had been far from simple, as public charging points remain thin on the ground in old Blighty - and are sometimes so far apart that the Mini-E struggled to reach the next one. The trip was also uncomfortable at times: Milligan was compelled to turn off his heater in sub-zero temperatures in order to eke the last few miles out of his battery.

"Not exactly impressive, or very practical, but then I'm sure Stevenson's Rocket didn't go very fast the first time he tried it," wrote Milligan.

Before it had even finished, Milligan's journey had made Llewellyn incandescent with rage. He blogs (verbatim)*:

Why did the BBC choose or allow Mr Milligan to make this absurd journey, who’s editorial decision was it? What is their motivation? ... BBC news have shot themselves in the foot in their eagerness to belittle and undermine a now rapidly emerging and disruptive technology. It’s worth reading the comments at the bottom of BBC page. It proves I am not alone in my suspicions of their motives. The only possible explanation of their need to do this daft prank is to please someone powerful within the BBC. I truly don’t know who? Do you?

Llewellyn was particularly unhappy with the Beeb's description of the Mini E as "a mass market EV ... this is the sort of car us normal people can expect to drive".

Indeed, so cross was the thespian and electrocar enthusiast that he got up at an early hour of the morning last Wednesday to lend his presence to a PR counterstrike mounted by Tesla Motors against the Beeb's journey. The firm, describing Milligan's reporting as "BBC bias" and "myths perpetuated by a BBC correspondent" decided to lend one of its latest, arse-kickingest Roadster Sport models to electric-vehicles enthusiast David Peilow in order to show that a battery car could make the journey to Edinburgh in "a single day".

Next page: What kind of person really, really loves the Tesla Roadster? Not the sort of person who can afford one
Page: