You know you're watching in a lively business when forecasts look dated as soon as they appear. Yesterday BP revealed its crystal ball-gazing exercise of forecasts for energy supply and demand to 2030.

It's as a good as any, but conservatively plays down the latest innovations in nuclear, synthetic hydrocarbons and unconventional fuel sources. Still, the BP Energy Outlook to 2030 forecast is well worth a read as a contrast to the alarmist version of long-term energy outlook popular in the press.

BP's forecasters reckon energy production needs to increase by 1.7 per cent a year until 2030 to meet global demand. That's a 39 per cent increase. Oil will decrease as a share of this, gas will enjoy a revival, and biofuels and renewables will contribute a small but increasing share of energy supplies. 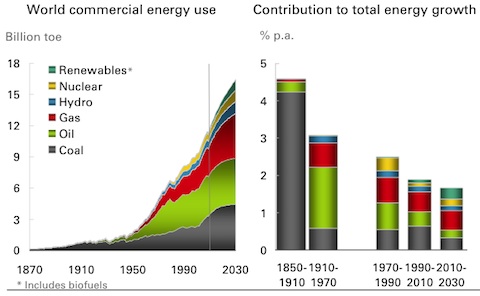 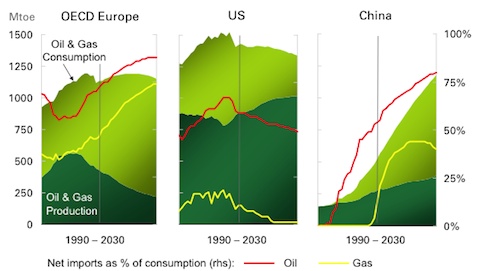 It sounds a tall order, but energy demand over the past 20 years has grown by 45 per cent - so it's really cranking out more of the same. And there are some subtleties in play here.

One factor often overlooked is "energy intensity", or the amount of energy required to produce a unit of GDP. During the rapid industrialisation phase of an economy's growth - which is when the industrial capacity and infrastructure is built out - energy "intensity" increases, only to subside later, and the pattern can be seen here. China and India's peaks will be more rapid and shorter than their predecessors. 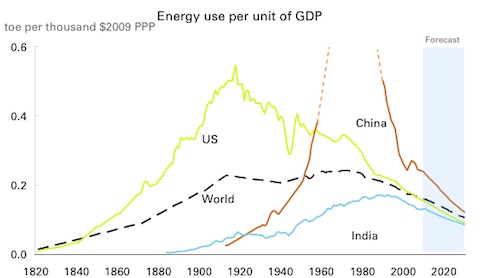 Then there's the absence of population hysteria. Population turns out to be red herring - the rate of increase is declining and the income growth, rather than head count, is what's relevant. (With developed-world fertility rates of 2.1, global population will actually begin to decline by 2035, the UN predicts). BP bases its forecast on 1.6 billion extra people, but a 100 per cent rise in real income - but suggests that slowing population growth and industrial growth after 2020 will be major factors in modulating demand.

Oil will continue its decline, BP suggests, with China's large coal output peaking in the middle of this decade. Gas and renewables show the largest growth. BP sees carbon reduction policies in Western economies reducing emissions by 10 per cent to current levels, largely through efficiency gains.

BP is positively bullish about renewable energy, given the recent setbacks across Europe. Because renewables produce energy that's so much more expensive than conventional sources, the difference is made up by pubic subsidy - diminishing as governments are broke - or through consumers' fuel bills. 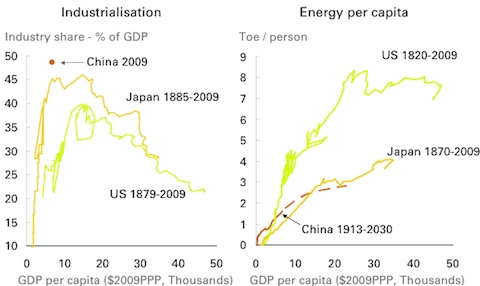 Not your father's industrial revolution

Countering popular perception, BP points out that on current trends the US becomes less reliant on imports, and may become a net exporter of natural gas. Meanwhile, the report suggests, China will become increasingly reliant on imported gas and coal.

Unconventional gas isn't ignored completely. Shale and coalbed methane (CBM) could contribute nearly 40 per cent to gas growth. That's an indication of how rapidly things can change. Similarly, a nuclear renaissance would have significant impacts on cost and carbon dioxide emission forecasts.

You can find more details here. ®

The International Energy Agency says natural gas reserves could supply Asia and Europe for 250 years if unconventional (shale and CBM) are exploited.