It's weird to see something from your childhood displayed as an ancient cultural artifact. Here at the newly refurbished Computer History Museum in Mountain View, California, I'm standing over a glass case that houses the Commodore 64, the same machine I begged my parents to buy me for Christmas in 1983.

Compared to today's slick and smart personal computers, the Commodore 64 is the village idiot. With its 8-bit, 1MHz MOS 6510 processor and 64KB of memory, the only thing chunky about this machine was its famous built-in keyboard. But the Commodore 64 was in the vanguard of a revolution, one that took computers into people's homes by making them mass-produced, affordable, and usable by people without maths degrees or special training. 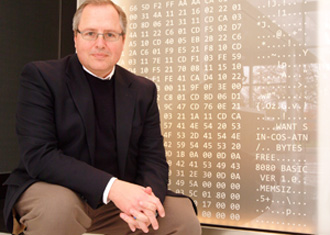 The Commodore even bested the iconic Apple II – or Apple ][, as fanbois of the day wrote its name – which was designed by that company's larger-than-life cofounder Steve Wozniak. When Apple's pioneering desktop debuted in 1977, the entry-level version with a mere 4KB of RAM cost $1,298 – significantly more expensive than the Commodore 64's 1982 intro price of $595, which later dropped to $199. The Commodore 64 was so popular that sales estimates range from between 17 and 22 million units during its 11-year run.

The Commodore 64 is now among 1,100 objects that comprise a new exhibition called Revolution: The First 2,000 Years of Computing at the Computer History Museum. Assembled by an army of 300 people over eight years, Revolution fills 25,000 square feet and is the crown jewel of a $19m renovation of a museum that's been an easy-to-miss landmark of Silicon Valley – the spiritual home of the tech industry – since 1999.

$19m is a hefty dose of private philanthropy by any standard, and one that's all the more impressive given that it came from an industrial sector famed for entrepreneurs and engineers obsessed by the future, not the past. Among the donors to Revolution is Bill Gates, who also provided the establishing gift: the BASIC interpreter tape he wrote for the MITS Altair 8800 while at Harvard in 1975, and that led to Microsoft and Windows.

Museum president and chief executive John Hollar told The Reg on a tour ahead of Revolution's opening that the exhibit centers on thematic moments in computing. "If you knit all those together, you get an interesting picture of where we are today," he said.

Revolution features pieces of the 700-square-foot, 30-ton ENIAC – Electrical Numerical Integrator And Computer – built by the US government between 1943 and 1945 to calculate missile trajectories. Not only was ENIAC the first general-purpose computer to run at "electronic speed" because it lacked mechanical parts, it was also programmed entirely by a staff of six female mathematicians who lacked any manuals and worked purely by deciphering logical and block diagrams.

There's also an IBM/360 from 1964, the first general-purpose computer for businesses that killed custom systems such as ENIAC that were built by and for governments. IBM staked its future on the IBM/360 – in today's dollars the project would cost $80bn. 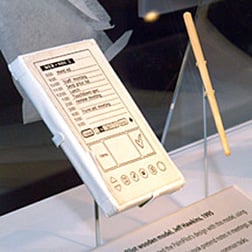 Revolution is home to one of Google's first rack towers, dating from 1999. Spewing Ethernet cabling down its front, the tower helped establish Google as a search colossus whose thumb is now on the throat of the web and society, choking out $23bn a year from online ads.

Is small and portable more your thing? There's the PalmPilot prototype and the original card and wood mock-up donated by Palm co-founder and Apple graduate Donna Dubinsky. With its stylus input, the PalmPilot became the first widely popular handheld device. The original models, the Pilot 1000 and Pilot 5000, predated Apple's finger-poking iPad by 14 years.

Revolution houses analogue devices that are more like workbenches, and is home to the first Atari Pong arcade game in its plywood case (which ignited the video-game revolution), a gold-colored Bandai Pippin from Apple (which disappeared without a trace), the Apple II, and the Altair that inspired Gates to eventually build the world's largest software company.

Next page: Overcoming the odds
Page: