The US intelligence services have launched a large secret payload into space using one of the most powerful rockets currently available, a mighty Delta IV Heavy, which took off for the first time from the west coast last night. 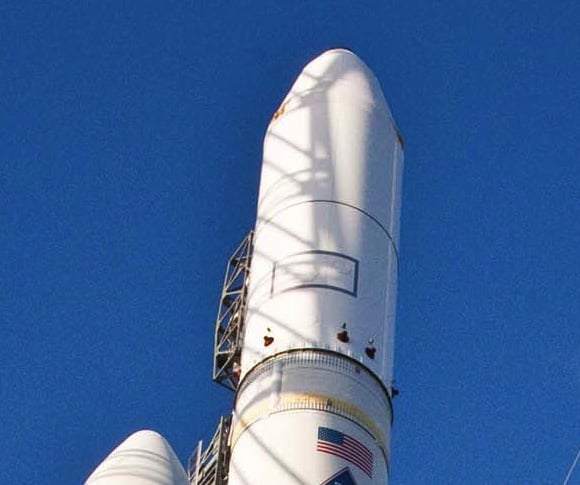 Soon to be literally above Top Secrets.

The launch, from the Vandenberg military space base in California, took place at 9:10 pm UK time. It was the inaugural takeoff of a Delta IV Heavy from Vandenberg's Space Launch Complex Six (SLC-6), once intended to send military Space Shuttle missions into orbit. Until yesterday, the massive Delta had only flown from Cape Canaveral airforce station in Florida.

Fully $100m had been spent upgrading the SLC-6 launch facility to take the Delta. Launches from the west coast are desirable from a security point of view as the planet rotates beneath the departing spacecraft, ensuring that it is over the ocean rather than land as it rises into orbit. This makes it harder for interested parties to track the ascent and immediately work out details of the orbit the payload may wind up on.

The Delta IV Heavy makes use of three RS-68 engines in the first stage and an RL-10 in the upper stage. All of them burn cryogenic liquefied hydrogen in oldschool style, rather than trendier (and much cheaper and easier to handle) kerosene or solid fuel.

Though much effort was expended during the design of the big rocket on attempting to cut launch costs, it proved unable to compete in the commercial launch market, and four of the five launches to date (including yesterday's) have carried military/spy satellites. The other was the initial test launch, which was only partially successful.

There has been discussion around using the Delta IV Heavy to carry astronauts into space, but thus far without result. For now its sole task would seem likely to be the one executed yesterday: carrying secret payloads into space for the US intelligence community.

The massive 23-stories-high rocket stack is capable of delivering over 22 tonnes to low orbit, though yesterday's delivery is likely to have gone into a high-angle polar track - in order to bring more of the Earth beneath its surveillance footprint - and thus probably will have massed somewhat less. (Polar orbits forfeit the helpful speed boost offered by the planet's rotation, and demand more of the launch rocket than equatorial ones.)

Few details regarding the cargo carried on yesterday's launch were released, though it is known that the payload belongs to the US National Reconnaissance Office (NRO), in charge of spy satellites. We are also informed that it fitted into a payload fairing 63 feet long and just under 17 feet in diameter.

Based on previous form, the secret satellite or satellites' orbit will presently be discovered by amateur skywatchers - and probably sooner by foreign powers with space capabilities. It (or they) will occasionally shift orbit and elude the watchers below for a time.

The NRO formerly tried to design "stealth" satellites which would not be so easily detected - the so-called "Misty" series, two of which are thought to have been launched in 1990 and 1999. The "city bus sized" stealthy sats were rumoured to be wildly expensive, and the first one at least was spotted and tracked anyway.

The Misty programme was reportedly cancelled altogether in 2007 due to cost overruns and doubts over its usefulness - though this has naturally not been confirmed. Some analysts and skywatchers believed that the third Misty would be so massive that only the Delta IV Heavy could lift it - and even the mighty Delta might need expensive upgrading for such a task.

Such upgrades would be paid for out of the "black" or secret budget, so it's still just possible that yesterday's Delta was such an enhanced version carrying the "Misty 3" which has long been speculated upon among secret-sat spotters, and which was originally supposed to be ready for launch by last year.

The expensive enhancements at Vandenberg's SLC-6, devoted to achieving a more clandestine orbital insertion, would fit well with such a theory - though also, of course, with a more humdrum spy-sat deployment. ®