U R Rao has analysed 45 years of data and declared that the forcing from charged particles is higher than previously thought, at 1.1Wm-2, and human-forcing lower than the IPCC "consensus" of 1.6Wm-2.

Rao should know his muons. He launched India's satellite program in the 70s, and became head of the Indian Space Agency in the 1980s; many of his 350 published papers are about galactic cosmic rays (GCRs). He makes an unlikely candidate for a skeptic, having written books on sustainability and implementing the United Nations' Agenda 21.

The influence of charged particles on climate is controversial, not least because it's based on observation and physics experiments, rather than trick cycling computer modelling. GCRs have been demonstrated to "seed" cloud formation, and small variations in cloud cover are known to have significant impacts on surface temperature.

The IPCC estimates human forcing via greenhouse gas emissions to be 1.6Wm-2, whereas clouds reduce the amount of incoming radiation received by 44Wm-2, also reducing the outgoing (longwave) radiation by 31Wm-2.

The quantity of GCRs reaching Earth depends on the solar magnetic field and Earth's own magnetosphere, which act as umbrellas shielding the surface from the particles. The strength of this "background drizzle" of GCRs varies, depending on the Earth's relative position to the galaxy.

Full results have yet to be published, but confirm the relationship. Others argue that cosmic ray penetration to surface level is merely a proxy for solar magnetic activity.

Despite the controversy, supporters point to both short-term and long-term correlations between cosmic ray activity and climate. 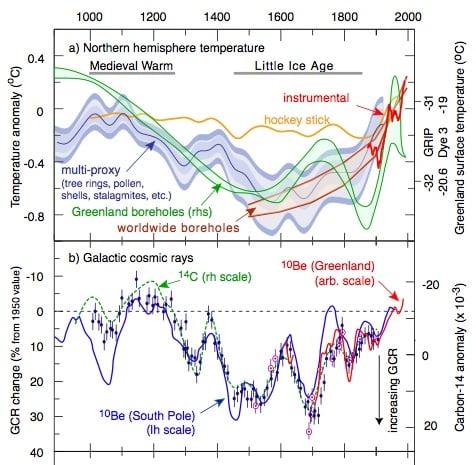 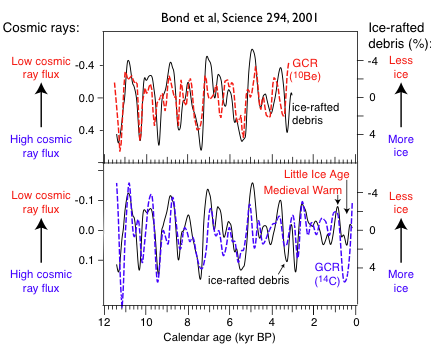 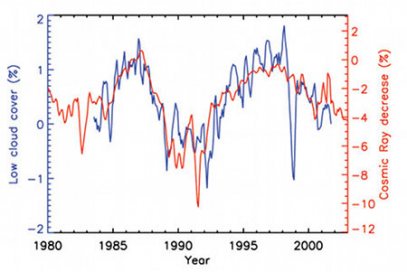 The report was commissioned by Indian environment minister Jairam Ramesh, who has described the manmade global warming hypothesis as a "religion".

"We’re not denying the contribution of greenhouse gases — we’re only trying to expand the scientific debate to look at some non-greenhouse gas factors that may also influence global warming," Ramesh told the Telegraph of India. ®