Yes! It's the iDevice-driven desktop droid

This little bad boy is the TankBot, an inexpensive micro-robotic toy controllable by iOS. 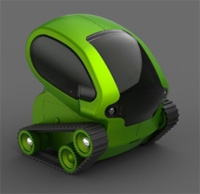 Manufacturer Desk Pets has developed a program that, using Apple's accelerometer tech, allows the TankBot to be controlled by tilting your iPhone. A forward tilt rolls him forward, a right tilt turns him right. Well, you get the idea.

It can also be switched into autonomous mode and with its built-in Infrared sensors, navigates through mazes or reacts to hand gestures.

Rather than being controlled with Bluetooth or Wi-Fi, a dongle is connected to the headphone socket of the iOS device.

The TankBot doesn't need batteries either, instead relying on a USB cable for power-ups, where a 30-minute charge will generate 15 minutes of action.