Next we heard some input based on practical experience from Dr John Buggenhagen, a geologist who has spent five years in Poland as head of exploration for San Leon Energy.

Poland receives 70 per cent of its gas from Russian-owned Gazprom, which has turned off the pipeline to neighbours the Ukraine and Belarus. Poland sits on perhaps the largest potential reserves of shale in the world, and for the fast five years has seen a gold rush, with 11 energy companies acquiring licences, drilling rights and creating exploratory wells.

Buggenhagen said it was a massive learning curve for both sides, and required sensitivity to local culture and administration that might not come naturally to Americans. But his biggest help was the enthusiasm of the local population, particularly in rural areas.

"For six months it's noisy and loud, there's trucks and noise, then it's ready. And they get roads and infrastructure and 50 years of local, low-cost gas." A well is surrounded by trees and looks like a small spinney – hard to spot from Google Earth, he said. Poles were delighted to be energy-independent from Russia, he said.

One unexpected threat came from Gazprom's funding of an environmental movement ... which popped up during question time.

"We're not particularly excited about shale," said a representative of the Combined Heat and Power Association. "It's more fossil fuel that we can burn, and exploiting more fossil fuel will lead to more combustion and carbon emissions."

"You're from a power association?" asked Grealy. "You sound like a vegetarian President of McDonalds".

Jenny Banks of the WWF (formerly known as the World Wildlife Fund) asked about contamination. Could the shale proponents cite one independent report that "unequivocally" showed there weren't issues, she asked.

Grealy suggested starting with the GWPC (the GroundWater Protection Council) the national association of state water regulators. They'd put out a statement criticising the film Gasland – first for factual inaccuracies, and secondly for the film-maker Joshua Fox's claim the GWPC refused to be interviewed for the movie. He'd never asked, they said. The GWPC recommended best practices but hadn't found a problem. Nor had anybody else.

Gasland gave shale some notoriety for showing householders with flaming water coming from their taps. But the local Oil and Gas Conservation Commission declared the combustible material had come from decomposing surface material, not the well. 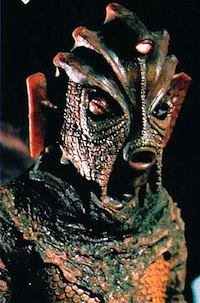 Environmentalists fear that deep drilling may disturb Silurians,
the race who live under the Earth's crust. (In Dr Who)

This isn't too surprising when the aquifer is at 100m, and the fracking takes place several thousand metres below. Contamination is likely to emerge through pipe leakage – half of the water/chemical solution returns up the pipe. A blowout would be much more serious. Examples aren't hard to find of complaints of contamination, and the odd isolated blowout; it's likely more stringent regulations will be introduced. A total ban, which is what the environmentalists want, doesn't seem likely.

None of the opposition seems to faze the shale enthusiasts, who point out the technology is changing all the time. George Soros has backed shale exploration via his hedge fund; Soros has a 22 per cent stake in San Leon Energy, and stakes in at least three others.

Shale will continue to have powerful opponents: the eco-lobby, the coal industry, Russia's Gazprom, and the nuclear industry. Early reports and blog posts on UK shale are rapidly adorned with negative comments, many from people purporting to be American residents affected by shale excavation. They must have uncanny radar.

If shale proponents think they're going to walk this one in Europe, by appealing to our budgets and common sense, they should consider the story of GM foods here - once the "Frankenfood" scare caught hold.®