Soon we'll all be picking keypad locks with our mobes

It's seemed like a long road, perhaps, but arguably the destination has been reached. PDAs have incorporated mobile phones and acquired increasingly zippy and flexible mobile/wireless data connections. Cameras have come aboard, and in some cases have become quite good. The resulting smartphones have since added the capabilities of almost any handheld/pocket-size gadget you can think of: torch, satnav, compass, accelerometer/inclinometer, NFC payment/ID swipe-chips... everything possible has now been converged. Or has it? 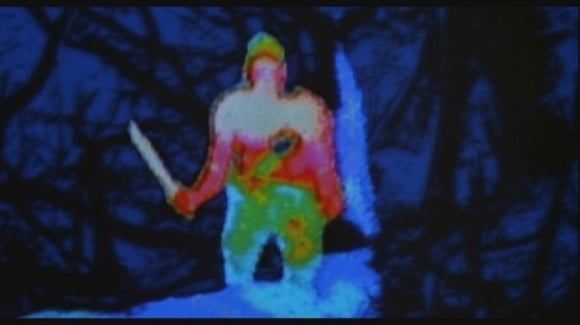 For some reason my knife has become very hot.

Certainly not, at any rate according to our old friends at DARPA, the US Defense Advanced Research Projects Agency - the place where promising young mad scientists worldwide, toiling in their dungeon laboratories to produce invincible robot assassins or freakish genetic abominations, hope one day to work.

This time, however, the maverick DARPA boffins have left off their more bizarro plans - artificial lightning, unstoppable self-aware robot tanks etc - to consider how a modern smartphone could be made a bit more snazzy. They consider that what one wants in a smartphone is a highly capable thermal imager allowing one not just to see in the dark but also to detect enemies (through smoke, mist, light vegetation etc if necessary) by picking up the very heat emitted from their bodies.

Thermal imagers are different from somewhat simpler "light intensifier" or "nightsight" devices working in the near or short-wavelength infrared. These are now cheap enough and portable enough that almost every Western combat soldier gets one, typically helmet mounted. At night, provided there is still a fair bit of short-wavelength infrared illumination (as from starlight, for instance, or "black light" torches filtered so that they emit only IR frequencies) one can see quite well using them - but enemies don't stand out any more than they would in daylight (indeed, less) and heavy cloud cover, smoke, mist, rain etc can all mean blindness for a user.

Thermal imagers working in the further infrared frequencies have a big advantage in that they can pick up the heat emanating from relatively cool everyday objects rather than needing superhot illumination sources (stars, bulb filaments) as nightsights do. To a thermal imager, almost no night-time at room or higher temperatures is actually dark: and the ability to distinguish hotter objects from colder can be invaluable for picking out lurking enemies, identifying disturbed earth which may hide a bomb, seeing through smoke or dust etc.

It's not just the military that uses thermal imagers, either: firemen use them for finding people or the seats of fires in smoke-choked buildings; they are used to detect electrical faults and for other technical purposes. They've even been employed, somewhat suspiciously, to attempt to pick out possible swine-flu sufferers (whose body temperatures would tend to be elevated from the norm) among airport crowds.

The only weakness of thermal imagers is that they don't work at all well through windows - the long wavelengths they detect won't go through glass. (This is why cars get hot in the sun: short-wavelength sun infrared can get in, but the warm interior is emitting only long-wavelength IR which can't get out. It's also one reason why thermal imagers have remained pricey to date, as you can't use glass optics in them.)

Next page: You can get it in your pocket now, therefore it ought to be in smartphones
Page: