Hubble squints at most distant galaxy

The Hubble Space Telescope has squinted at what's "likely to be the most distant object ever seen in the universe" – a galaxy some 13.2 billion light-years from Earth.

The dim cluster of blue stars existed just 480 million years after the Big Bang, NASA explains, and is a significant find for scientists aiming to explain how galaxies formed in the early universe. 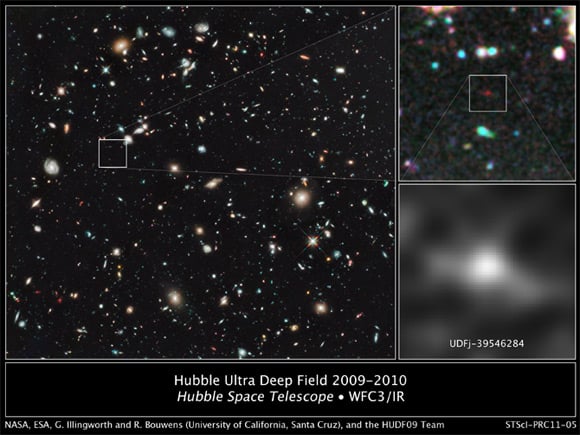 The agency elaborates: "The object appears as a faint dot of starlight in the Hubble exposures. It is too young and too small to have the familiar spiral shape that is characteristic of galaxies in the local universe.

"Although its individual stars can't be resolved by Hubble, the evidence suggests this is a compact galaxy of hot stars formed more than 100 to 200 million years earlier from gas trapped in a pocket of dark matter."

NASA suggests that the galaxy "offers surprising evidence that the rate of star birth in the early universe grew dramatically, increasing by about a factor of 10 from 480 million years to 650 million years after the Big Bang".

Investigator Garth Illingworth, of the University of California, said: "We're peering into an era where big changes are afoot. The rapid rate at which the star birth is changing tells us if we go a little further back in time we're going to see even more dramatic changes, closer to when the first galaxies were just starting to form."

The find is right at the limit of Hubble's capabilities, having a redshift of 10 and being "only visible at the farthest infrared wavelengths observable" by the space 'scope. Astronomers anxious to look even further back in time will have to wait for the James Webb Space Telescope, slated to launch in 2015.

Nonetheless, NASA's Astrophysics Division director Jon Morse, said of the venerable eye in the sky: "After 20 years of opening our eyes to the universe around us, Hubble continues to awe and surprise astronomers. It now offers a tantalizing look at the very edge of the known universe – a frontier NASA strives to explore."

Garth Illingworth and fellow investigator Rychard Bouwens of the University of Leiden in the Netherlands have published details of the discovery in today's issue of Nature. ®