The All Party Parliamentary Group on Peak Oil And Gas (catchily known as, er, APPGOPO), which currently consists of 21 MPs and a peer (down from 25 MPs and seven peers), and which is chaired by John Hemming MP ( who nominated himself for the News of the World's Love Rat of the Year competition in 2005) commissioned the work from zero-growth advocates "The Lean Economy". The report recommends Tradeable Energy Quotas which would impose rations that fell purposefully short of the average household's needs – " forcing people to directly think about their energy use", ClickGreen reports. 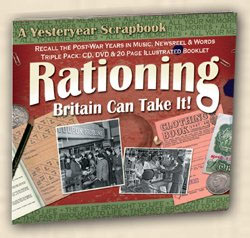 It isn't a new idea. Rationing was examined in depth by the Department of the Environment (as it then was) in 2006, and won support from David Miliband, then DEFRA minister. The emphasis back then was less on the rationing ("the Government would set limits on the amount of carbon that could be used", according to the proposal), and more on the alternative currency aspect: everybody would get a personal "allowance" swipe card. Miliband's rationing card proposal won support from Tory MP Tim Yeo.

Former MP and APPGOPO founder Colin Channel – who has since left Parliament following the expenses scandal – described the not-quite-enough fuel ration as "a concept of brilliant simplicity, offering a predictable and orderly reduction of greenhouse gas emissions year-on-year, with flexibility in an enclosed system, independent of taxation and providing complete transparency between goals and delivery."

But one critic of the idea, MP John Redwood, highlighted a flaw.

"Government inspectors would need to watch over everyone’s habits and try to find a way of recording just about everything we do", he pointed out, so much so it "would make the ID computer look modest, cheap and not so intrusive" by comparison.

Back in Islington n'Acne, Ackers says he now personally sees the merits of coercion in bullying people into adopting the correct lifestyle:

"The Chinese system of command and control government seems very attractive from afar," he says, wistfully.

These are strange times. As the public gets less and less interested in Green Guff (as you'd expect in an economic downturn – because you have to be pretty well off to play these games) and Climate Change, the virtual policy-making gets ever more fanciful and baroque. ®