Oracle is increasing the capacity of its T10000 tape fivefold, doubling its I/O speed, and enabling a 5-exabyte tape library.

In term of capacity, it blows competing libraries from IBM, Quantum, and SpectraLogic out of the water. 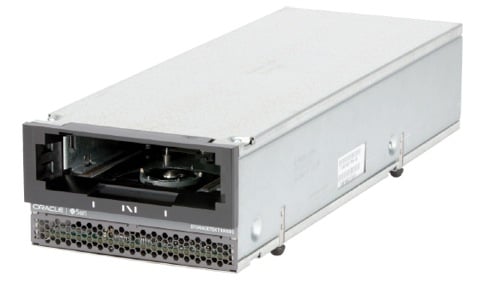 The T10K C drive and StreamLine library can be connected to both mainframe and open systems servers via FICON and Fibre Channel links.

Oracle has also introduced File Sync Accelerator technology to speed up the restoration of small files from the T10K C. There's more on this in a 5-page datasheet (PDF).

IBM's TS1130 tape has a 1TB capacity with JB/JX media, and a 160MB/sec data rate – although it has a 400MB/sec burst rate. Oracle has leapfrogged both competing formats comprehensively. LTO won't catch up until the LTO-7 format, expected roughly in the 2014/2015 timeframe. IBM's TS1130 roadmap is not publicly known, but we might expect Big Blue to announce something in response to Oracle.

Oracle worked with FujiFilm, which developed the Barium Ferrite particles used in the tape media coating. FujiFilm calls this its Nanocubic technology, and IBM Research said in January of last year that it was working on a 35TB tape cartridge using this technology. That indicates to us that Big Blue will have an Oracle-equalling or Oracle-bashing tape announcement in the not too distant future.

For now, Oracle says that compared to either TS1130 and LTO-5-based libraries, its library can store 17 times more data (than IBM), run over five times faster, save 3x to 5x on floorspace, and 23 per cent on cost of ownership. The T10K C backs up a 35TB database in four hours; this would take six hours with a TS1130 and seven hours with a LTO-5 library. Take that, not-quite-so Big Blue and you LTO consortium members HP, IBM, and Quantum.

The new drives can be fitted into a StreamLine SL3000 library, and a T10K C drive can read T10K A and B format tapes. A CERN researcher was quoted by Oracle on its webcast announcing the new format, and we can assume that Oracle's tape customer base will take to the new format eagerly.

The StreamLine can be used as part of a hierarchical storage scheme that combines disk and tape with Sun Storage Archive Manager, and can sit behind a StorageTek Virtual Tape Library to provide a disk-to-disk-to-tape data protection scheme combining disk speed and tape capacity. There is strong integration with Oracle software products.

All-in-all, there's simply no denying that Larry's engineers have come up with a winner. Price and availability details were not released. ®