Few loved it while alive

On Monday, Apple ended its nine-and-one-half-year Xserve experiment, and reactions are mixed. One outspoken analyst says the decision "sucks," but a broad-ranging survey reveals that most users of that Jobsian rack-mounted server don't hold a grudge against Cupertino.

"I understand the decision. The truth is, I don't think Apple ever sold a lot of Xserves," said John Welch of The Zimmerman Agency, speaking at an Industry Forum attached to last week's Macworld Expo. A reasonable reaction – but he then added: "I don't have to like it. I don't have to agree with it. I understand it. I just think it sucks."

According to a survey of 1,200 Xserve-using IT pros, however, mainstream reaction is more muted: two-thirds plan to keep their Apple 1U boxes as part of their server mix for at least two years. "People are going to keep their Xserves for a long time," Reid Lewis, president of the Enterprise Deskop Alliance (EDA) told The Reg at Macworld Expo.

The EDA survey respondents broke down into approximately equal numbers in four different groups: small businesses (under 100 employees), larger businesses and government agencies, K-12 education, and higher education. The organizations used the Xserves to provide support to over 1.2 million desktops and laptops – and they plan to keep doing so for the immediate future.

"No one going to drive in the forklift on February first and get rid of the Xserves," Lewis said. "They're just going to keep them running."

Knowing this bit of information, Reid believes, will help sysadmins in their arguments with management. "If you're sitting there with a bunch of Xserves in your data center, wondering what to do, you can now see ... if your intuition is, 'I'm just going to keep them there', well, so is everybody else. 'I'll go to my boss and say I'm like everybody else'." (The EDA is preparing a webinar for March 2 to help IT pros with their transition.) 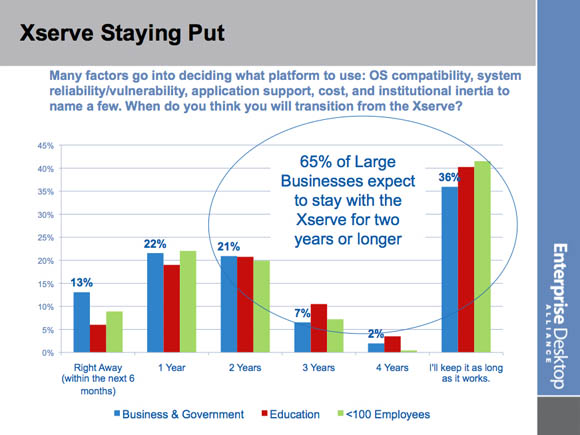 Over a third of Xserve users plan to run their Jobsian boxes into the ground (source: EDA, click to enlarge)

Of these four groups, Lewis said, small business and K-12 Xserve users were more inclined to take Apple's suggestion and migrate to Mac Pros or Mac minis running Mac OS X Server, but not the larger organizations. Despite this breakdown, however, Mac OS X Server understandably remains part of the 1,200 IT pros' plans when it comes to such Mac-centric services such as software updating, Netboot, Workgroup Manager, and the like. 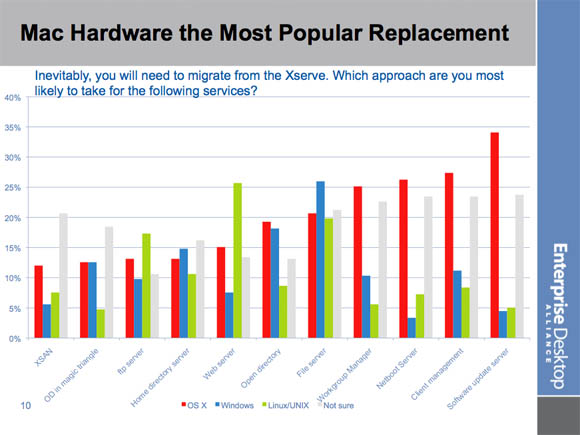 Welch took a somewhat different tack, offering the opinion that since a Mac mini server can work quite well in small businesses, especially for low-load tasks such as being Open Directory replicas, the acceptance of the Mac mini for such tasks was one of the reasons that Apple dropped the Xserve.

"Apple has numbers to justify this," he said, "[but] I still think it sucks. However, Apple, I think only ever dealt directly with data centers by accident. The Xserve RAID, and I think the Xserve again were just ways to prove that Apple could in fact do server hardware."

Welch told his audience that, in his opinion, Apple was never really invested in the Xserve. "The Xserve, for a lot of reasons," he said, "was always a very weird fit in a lot of places, and I tend to think – I have no proof of this, this is complete, pure opinion and speculation – that the Xserve was done more as a way to prove that Apple can do server hardware that there was ever this desperate need for it."

Despite the Mac mini's convenience as a low-load server for small businesses, EDA program director Tom Cromelin told us that there are plenty of obvious reasons why larger businesses have no interest in considering it as an Xserve replacement. "A lot of the [enterprise-level survey respondents] would comment anecdotally that one of the challenges for them is that ... the Xserve is a rack-mounted server and the mini and the Mac Pro don't fit," he said. "It doesn't have redundant power supplies, it doesn't have all of the checklist items." In short, it may serve, but it's not a server.

While enterprise-level IT folks with whom the EDA spoke approached the questions brought up by the end of the Xserve in terms of practicality, it's not too much of a stretch to say that Welch was ticked off. "I think based on the fact we have today – we have one fact on this – the Xserve is going away on January 31st," he said, "and today we have no announcement for any replacement of any kind, whether hardware or virtualization, or anything else. It's not the best decision I've seen out of Cupertino."

The EDA's respondents, however, don't appear to hold any grudge against Jobs & Co. As Reid told us, one question they asked was: "How will this impact your buying other stufff from Apple? Are you going to be burned and run the other way?"

Among respondents from small business, education, larger business, and government, however, the dominant reponse was that the demise of the Xserve made no difference in organizations' plans to deploy more Mac clients. 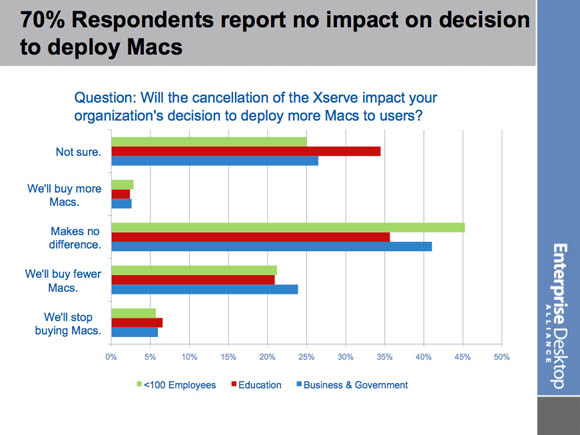 No more Xserves? No problem (source: EDA, click to enlarge)

Referring to the fact that the EDA's survey was conducted only a week after Apple's announcement that it was discontinuing the Xserve, Cromelin described the approximately 5 per cent of respondents who stated that they were going to stop buying Mac as possibly a result of "the indignation factor," as he put it.

Welch wears his indignation on his sleeve, not only about Apple's "It sucks" decision to dump the Xserve, but even more so against the chattering classes who warn against employing Apple products – especially iOS devices – in the enterprise. "The stuff coming out in opinions and pundits about iOS in the enterprise is fetid idiocy," he told his Macworld Expo audience. "It has less to do with facts than Taco Bell beef enchiladas have to do with beef."

That statement may have little to do with Monday's demise of the Apple Xserve, but it was too delicious to go unnoted. ®