Blaster from the past

Speedlink is celebrating 25 years of joystick jubilation, with the release of a limited edition gold Competition Pro - the ultimate home arcade accessory.

Those of you who owned a Commodore 64 or Amiga, will look back upon your first Competition Pro with nostalgic exhilaration.

Now on its silver anniversary, a quarter of a century since it was launched, Speedlink presents the Competition Pro 25th Anniversary Edition. 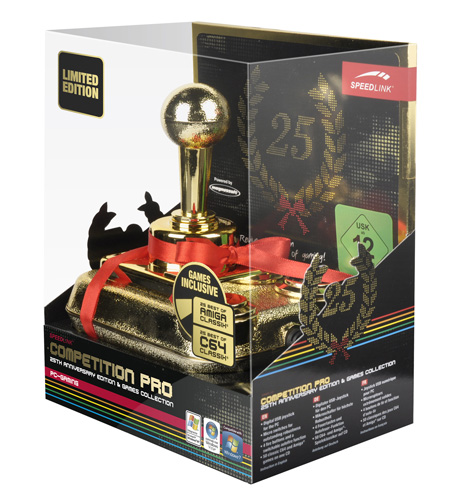 Pushing all the right buttons

Limited to 10,000 units, each joystick comes with a unique serial number and certificate. While it'll connect to your Windows PC through USB, it upholds the classic features such as micro-switches with memorable clicking sounds, as well as the manic machine gunner's favourite: a continuous fire button.

The joystick also comes with a CD of 50 original games from the golden era of home computing, including Turrican from the C64 and Arkanoid from the Amiga.

Many of us that craved the grail of gaming success - to gloat at the towering face of Sir Patrick Moore and win the golden joystick on 1990s TV show Gamesmaster - will be itching in anticipation.

The Speedlink Competition Pro 25th Anniversary Edition is available from March, although there's no word on pricing just yet. ®