Boffins hope for dimensional portal event at LHC by 2013!

Top boffins at international science alliance CERN have decided to postpone a planned upgrade and keep the Large Hadron Collider - arse-kickingest particle-punisher and largest machine of any kind built by the human race - running at current power levels to the end of 2012.

This decision has been made because scientists believe there is a serious chance that extremely interesting dimension portal events will soon be generated by the colossal matter-mangler. 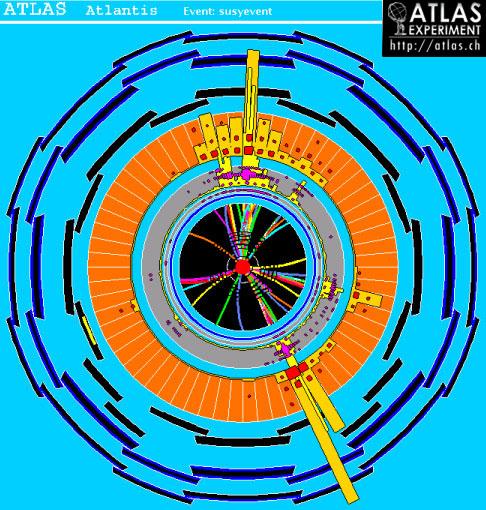 Simulation of a supersymmetry event imaged by the ATLAS experiment at the LHC.

"With the LHC running so well in 2010, and further improvements in performance expected, there's a real chance that exciting new physics may be within our sights by the end of the year," said CERN's Research Director, Sergio Bertolucci, announcing the decision to keep the Collider running.

"For example, if nature is kind to us and the lightest supersymmetric particle, or the Higgs boson, is within reach of the LHC's current energy, the data we expect to collect by the end of 2012 will put them within our grasp."

Dr Bertolucci has previously briefed the Reg on the intriguing theory of supersymmetry, which suggests that space-time actually has up to ten dimensions rather than the humdrum four we can normally perceive. The eminent boffin explained it to us in 2009 that the LHC might cause a "door" to "an extra dimension" to open up.

"Out of this door might come something, or we might send something through it," Bertolucci told us on that occasion.

Such supersymmetric dimensional portal events could occur as a result of the tremendously violent collisions produced at the LHC, in which pairs of protons or lead ions travelling within a whisker of light speed crash into one another head-on inside the mighty detector caverns situated around the underground particle-beam racetrack outside Geneva.

Supersymmetry-type collisions in which a dimensional portal would open to emit bizarro-stuff known as "sparticles" - or perhaps in which mass or energy could be emitted transversely out of our normal spacetime outwards through the portal - would, however, be extremely rare.

"We need a good understanding of the ordinary collisions so that we can recognise the unusual ones when they happen. Such collisions are rare but can be produced by known physics," explains Dr Oliver Buchmueller, an Imperial College London boffin based at CERN.

"We have already examined some three trillion proton-proton collisions and found 13 '[supersymmetry]-like' ones, around the number that we expected. Although no evidence for sparticles was found, this measurement narrows down the area for the search for dark matter significantly," adds the doc.

Apart from dimensional portals, LHC boffins also hope of course to find the Higgs boson (aka "God Particle") and solve the puzzling issue of dark matter - stuff and things of strange sort, possibly extradimensional, of which there may be a great deal more in the universe than there is regular matter (all the planets, stars, people etc). Some physicists consider that the dark matter may exist in the form of extra-dimensional sparticle stuff, in which case detection of it at the LHC would be a big day for boffinry.

The prospect also exists of finding out where the hell all the antimatter is - theory suggests that equal amounts of matter and antimatter should have resulted from the Big Bang, but these days there's a fair bit of regular matter around and antimatter is vanishingly rare. (Far too rare even to blow up the Vatican, it turns out.)

It had been planned to close down the LHC for a lengthy upgrade at the end of next year, which would allow it to safely be cranked up to its full blast - seven tera-electron-volt (TeV) beams allowing horrendous 14-TeV collisions. At the moment it is limited to 3.5 TeV beams for a maximum particle-prang potential of 7 TeV: the more cautious red line had to be painted on the big dial following a catastrophic electroblast superfluid helium explosion mishap in 2008, which took the great machine out of action for months.

Replacement of the offending copper electrical connections - which might explode leading to similar unpleasantness if the machine is cranked up to full bore - all round the 27km subterranean circuit would be a lengthy task, meaning a year of missed collisions, and physicists think that major revelations may be within their grasp even at the reduced 3.5 TeV cutoff. Hence the postponement: after all, 7 TeV collisions are hugely more powerful than the 1 TeV plinkings produced at the previous most powerful atom-smasher, the USA's Tevatron.

According to CERN, the LHC will fire up following the winter break this month and will keep punching particles until mid-December. Following a short stop over Xmas, as is normal routine, another full year's matter-mangling will take place in 2012.

"If LHC continues to improve in 2011 as it did in 2010, we've got a very exciting year ahead of us," said CERN's top Accelerators and Technology bigwig, Steve Myers. "The signs are that we should be able to increase the data collection rate by at least a factor of three over the course of this year." ®

Readers should note, disappointingly perhaps, that dimensional portals which could be opened by the LHC would be so tiny and exist for such ultra-brief instants of time (10-26 seconds, according to Bertolucci) that they would be unsuitable for any kind of interdimensional invasion and/or travel by humans, parallel-universe Nazis or Romans, dinosaurs, dark nega-deities from the Nth dimension etc.

We did postulate such a portal appearing at the LHC in this April Fools piece, but even for an April Fool we had to suggest that the portal was actually generated by dark-matter beings from the fifth dimension as a response to the LHC, rather than by the machine itself.