Open data advocates are questioning why the Home Office splurged £300,000 on its shiny new police.uk crime-mapping website, which launched this morning. Sort of.

The portal has been struggling to stay stable over the past few hours since the government hit the live button on the site.

A Home Office spokesman told The Register that its tech team was currently "looking into" what had gone wrong.

Reports on Twitter suggest the site is largely failing to cope with all the interest it is currently receiving from UK residents keen to see how much crime is taking place on their doorsteps. 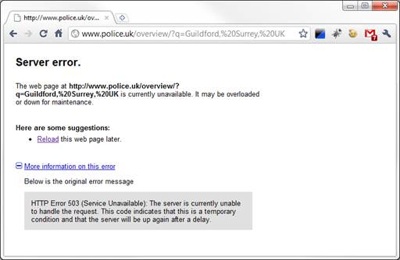 Meanwhile, some of Blighty's developer community are perplexed by how much the government has spent on the portal, given that the David Cameron-led Coalition has made such a big play for championing open data online.

Rewired State's Emma Mulqueeny, who tweets under the handle hubmum, was exasperated by how much cash the Home Office had spent on police.uk.

"£300k paid by taxpayer funds c/o Home Office for data driven map in the name of open data? Exactly the opp of the whole flipping point," she said.

The Google Maps-powered API could have cost a lot less if the open-dev community had got their hands on the data, she argued.

We asked the Home Office if it could provide us with a breakdown of costs and also put Mulqueeny's concerns to the government department.

A spokesman said it was unlikely the figures could be released "for commercial reasons".

He was unable to immediately respond to the concerns expressed by Mulqueeny and others, however. We'll update this story if the Home Office gets back to us with a further statement. ®