The Japan Aerospace Exploration Agency (JAXA) has a cunning plan to tackle the menace of orbiting space debris - a really big metal net.

According to the Telegraph, the agency has hooked up with fishing net manufacturer Nitto Seimo Co to develop a metal mesh which will capture rogue scrap and consign it to incineration in the Earth's upper atmosphere.

Nitto Seimo has spent the past six years working on the space net, and if all goes to plan, it will be ready for deployment in two years.

Technical details are scarce, but the junk scoop is apparently made up of "three layered metal threads, each measuring 1mm diameter and intertwined with fibres as thin as human hair".

After launch, the net will extend over several kilometres, capturing debris while simultaneously acquiring an electrical charge - something which will eventually cause it to be pulled by Earth's magnetic fields towards a re-entry burn-up.

Space debris poses a real threat to orbital shipping, and there are as many as ten million bits and pieces waiting to do some serious damage to spacecraft and satellites. 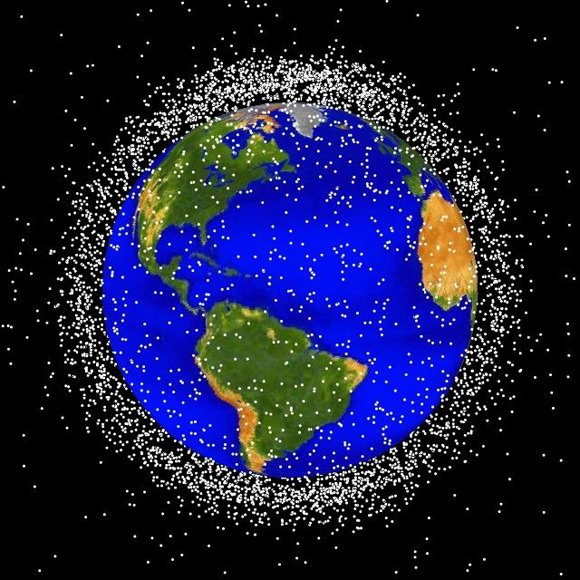 NASA's Orbital Debris Program Office keeps a close eye on the situation, and provides images of just how much junk is hovering over our planet (see pic above*).

* This particular graphic is space garbage in low Earth orbit within 2,000 km of the Earth's surface, representing "the most concentrated area for orbital debris".

NASA notes: "Approximately 95 per cent of the objects in this illustration are orbital debris, i.e., not functional satellites".