After nearly a year of futzing around, Dell and Canonical are tag-teaming to sell and support a mix of Dell servers and Canonical's Ubuntu Enterprise Cloud hypervisors and management tools to customers who want to build private or public clouds that are clones of Amazon's EC2 service.

Back in March 2010, when Dell took a bunch of its servers that were custom-designed for hyperscale data centers by its Data Center Solutions unit and mainstreamed them as the PowerEdge-C servers, it said that its cloud strategy involved selling half-rack and full-rack configurations running Joyent's cloud management tools, and added that it was partnering with a bunch of third parties to stand up hardware/software combinations on those machines.

The partners that Dell initially lined up for the cloudy PowerEdge boxes were Greenplum, for a parallel data warehouse appliance (which was launched by EMC last October after the company ate Greenplum last July), Aster Data for a data analytics appliance, and Canonical for a ready-to-puff UEC cloud.

Last summer, Dell's director of cloud software solutions John Igoe told El Reg that Dell was still working on the blueprints for the UEC/PowerEdge-C cloud stacks, and that they would be available in the "next few months."

On Wednesday, Dell and Canonical announced that these UEC stacks are finally available. The stacks include Dell's PowerEdge C2100 and C6100 servers, the UEC cloud fabric, UEC Assist services from Canonical, a deployment guide, and pre-configuration files to make the whole shebang work.

The resulting cloud that is implemented in the product uses the same management APIs and virtual-machine images as are used on Amazon's public EC2 cloud, allowing customers to build a private cloud that is functionally equivalent even though it is based on Ubuntu Linux, the KVM hypervisor, and the Eucalyptus cloud extensions instead of Amazon's Xen hypervisor and internal management tools.

The cloudy stack has the catchy name of UEC on Dell Servers Standard Edition, and you can see its data sheet here. The name implies that there will be an Enterprise Edition – or at least a non-Standard one – but no word from Dell on what this might be.

You can see the reference architecture for the UEC stacks here, and this is what it looks like schematically: 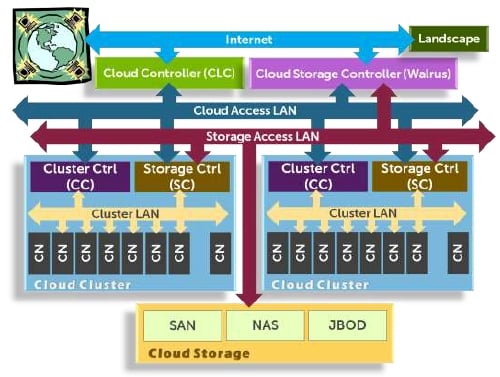 This is why you want the vendor to build the cloud

Walrus implements the REST and SOAP APIs that are compatible with Amazon's S3 storage cloud and is, practically speaking, the file system for the cloud. The C2100 running all of this software is a 2U rack server with two of Intel's Xeon 5600 processors, up to 144GB of main memory, and a dozen cheapo 3.5-inch disks. To do the UEC job, Dell is configuring the machine with two Xeon L5630 processors (four cores running at 2.13GHz), 72GB of main memory, and six 600GB SAS disks with a RAID 6 disk controller.

The compute nodes of the Dell UEC cloud stack are based on the PowerEdge C6100 servers. That is the ultra-dense Dell box that puts four two-socket Xeon 5600 machines into a 2U chassis with two shared power supplies, and with either a dozen 3.5-inch or two dozen 2.5-inch SATA drives across the front of the machine. In this case, Dell puts two of the Xeon L5630 chips on each node, plus 64GB of memory. Each node has two 300GB SAS disks and no RAID, since the local disks are only used for scratch.

The compute nodes are hooked to the controller and infrastructure nodes, and to each other with a Dell PowerConnect 6248 switch, which is a 48-port Gigabit Ethernet switch with optional 10 Gigabit Ethernet uplinks.

Dell tosses in Ubuntu 10.04 Server Edition – that's the Long Term Support release, which gives five years of support from Canonical – and the companion UEC extensions. There's no release number for this code, but it's based on Eucalyptus 1.6.2.

Dell did not provide pricing for the complete stack, but Canonical was kind enough to furnish El Reg with some pricing on the Canonical services sold in conjunction with the PowerEdge clouds. The UEC Assist Standard service provides access to the Landscape service from Canonical to manage systems as well as business day support; it costs $5,950 for up to five machines for a year's worth of support, with volume discounts on server nodes added to the cloud cluster beyond that given a volume discount. On 50 machines above the base five, you're talking $1,175 per node, per year. The UEC Assist Advanced Services provide 24x7 support on the clouds. The base support contract for five machines for a term of one year costs $18,700 per year, and it costs $2,400 per node on top of that if your cloud has 50 or more nodes.

Dell is doing the bundling and the selling for the UEC cloud stack, including the sale of the UEC Assist services, Canonical tells El Reg. The two companies are collaborating on lead generation for selling the bundle, and for add-on services such as consulting and training. ®