Murdoch, The Daily, and life without the web

News Corp doesn't get a whole lot of love on the web, nor does it seek it. Just over a year ago company chairman Rupert Murdoch described news aggregation as "almost wholesale misappropriation of our stories… it's theft", and shortly afterwards the paywalls went up at the Times and Sunday Times. Web readership plummeted, subscriptions have been slow to take off, and when the papers' arch-rivals at the Guardian say the papers have entered "a vault of darkness" they might just have a point. 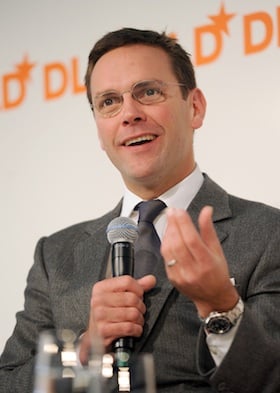 But that's most certainly not how the Murdoch clan sees it. Interviewed at the DLD11 conference in Munich last week James Murdoch, chairman and CEO of News Corp Europe and Asia, had a lot to say about paywalls, iPad apps, and the importance of brands and copyright. And he did happen to mention The Daily, News Corp's iPad-only launch, which it turns out he'll be unveiling this week.

A little perspective first. News Corp has spent a lot of money on planning and staffing up The Daily, it has also spent substantial amounts on the design of its paywalled sites and newspaper apps, and these costs certainly haven't yet been justified in terms of revenues or users. But despite owning numerous major newspapers, News Corp arguably isn't really a newspaper company, from a revenue perspective. According to James Murdoch, in Europe over 70 per cent of revenue comes from digital pay TV, which he sees as having plenty of room for expansion, while newspapers account for maybe 15 per cent. It's high profile, high prestige stuff, sure, but by News Corp standards it's financially small potatoes.

News Corp clearly has the resources to sustain its existing newspapers for quite a long time without worrying too much about profit, and it can indulge its iPad/paywall hobby (or experiment in the future of news publishing) for as long as it can be bothered, or as long as it takes. Guardian editor Alan Rusbridger famously suggested that his paper's dating service probably made more money than the Times makes out of online news, but the Guardian itself quite possibly makes less money out of online news than it does from its dating service - and the Guardian has a lot less financial weight behind it than Murdoch's newspapers have.

In Murdoch's view, size and brand are key to his company's future, and key weapons for it. He likes "big franchises that can really differentiate well," and says that "big brands are becoming rarer." The Murdoch empire has plenty of big, well-funded brands, the newspaper ones including the Times, the Sunday Times, the Sun, the Wall Street Journal, the Australian, - and then there's Sky, a substantial franchise in numerous territories, and Fox News, which whatever you think of it is most certainly a major brand.

As the big brands are becoming rarer, "the thing that suffers is the middle ground," he says. Weaker brands don't have the weight and the financial resources to sustain themselves, and the web is playing a major role in undermining news brands. If you get the same stories everywhere, and free undermines the economics of news, then it all gets reduced to a lowest common denominator, with everybody "cutting and pasting wires." The Murdochs have taken aggressive steps to prevent their own output going into the cut and paste mill, certainly, but if you think of the paywall as simply defensive, you're missing half the story - they see good, well-funded journalism as a vital component of unique news brands, and that's an aggressive play, not a defensive one.

So The Daily is clearly intended to be a big brand. Murdoch describes it as "an exciting new digital publication" that is employing "the best journalists in the world," and says "it is going to surprise people in terms of its depth and quality… it will succeed or fail on its journalism." And it'll cost just 99 cents a week, a price tag that suggests that the Murdochs want a rip-roaring, mass-market success, and that they're more concerned right now with establishing the principle that people will pay for digital news than they are about the bottom line. Or alternatively/additionally, they want to blow the New York Times' digital operation out of the water (Murdoch pere has been waging war on the NYT since he bought the Wall Street Journal.)