Diary of a Not-spot – the final chapter

An improved antenna and radio, have tipped the balance to enable a microwave link at more than five times the previous best of 700Kb/sec, despite the replacement kit costing less than the original, being several hundred times easier to fit and even looking more the part – assuming wire mesh is one's preferred style. 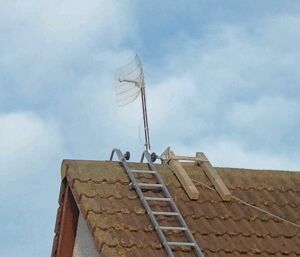 It's a matter of taste, but I rather like it.

Achieving this unprecedented level of connectivity has already involved digging up a sheep field, risking life and limb passing close to a monkey puzzle tree and taking more genuine risks atop too many ladders to mount a wooden horse and get a 5km line of sight to a house nearer the telephone exchange. That attained an average speed of 700Kb/sec, but the target was always 2Mb/sec – recommended by the UK government as the speed to which every responsible citizen should be striving.

Attaining that meant getting higher, for a cleaner line of sight, or fitting a bigger dish antenna. Some readers suggested a better radio might help too, which turned out to be more important than anticipated.

Planning permission and building logistics make getting higher really hard. One reader did point me in the direction of a SCAM 12 mast which, intriguingly, pumps up to 12m but isn't permanent and therefore doesn't (apparently) require planning permission. At £400 (second-hand) it would get me a clean line of sight, but would really annoy the neighbours so it seemed appropriate to try a new radio and antenna before before exploring the mast option further.

Several readers mentioned Ubiquiti as a quality manufacturer, and with Wi-Fi Stock UK selling their AirGrid M5 radio/antenna combination for a shade over £50, there seemed little to lose in getting one to see if it would help (despite the £15 surcharge for Highland delivery). I suspected Claire would be reluctant to have such a dish at her end (a suspicion she has since confirmed), but hoped that even at one end a decent rig might help – a hope that was borne out with a degree of improvement that makes replacing both ends unnecessary.

The AirGrid is a quality bit of kit – snapping and clipping together while weighing only 300 grams more than the EnGenius box it replaced, it also comes with a power over ethernet injector which turned out to be higher rated than the existing supply (the radio failed to boot when connected to the wrong supply). But it's the software that really stands out from the EnGenius alternative – being much more powerful, easier to use and superior in every way.

The most noticeable improvement is the four LEDs on the radio itself, which indicate the signal strength. The level at which they light is configured over the web interface, so one sets them around one's expectations and can point the antenna in the right direction without having to constantly refer to a balanced terminal or shout signal strengths down to a comrade watching a screen.

Next page: Those four little lights that mean so much...
Page: