In keyboard mode, the pad illuminates to show a complete touch keyboard. The key layout on our sample appeared to be for a pan-European Revo, so most of the vowel keys were crowded with accented variants. There is a UK version, though, which is less busy – check you get one. 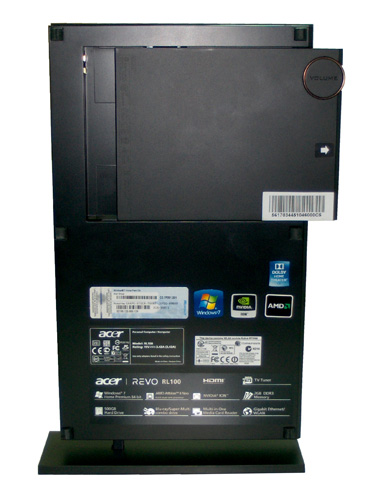 The tablet remote resides in the body of the beast

As well as the standard Qwerty keys, there are several more suited to a remote, including Home, Back and cursor arrows. They have a light, positive touch, sometimes a little over-sensitive, but each key-press is beeped, so at least you know when you’ve double-keyed.

The Revo 100 is based on a 64-bit, dual-core AMD Athlon II Neo K325 processor, slightly surprisingly twinned not with ATI graphics, but with an nVidia ION GPU. There’s 2GB of DDR3 memory fitted and a socket for another stick, if you want to increase it. The Sata hard drive is a 2.5in, 500GB model.

It’s good to have a Freeview tuner included in the machine, as it’s then set-up through Media Centre for TV playback with a minimum of fuss. However, there’s only a single tuner, so you can’t watch one channel while recording another, and the tuner isn’t HD-capable, an odd design choice on a machine geared to HD output through Blu-ray.

The machine works well. Although the processor runs out of steam if you try and play games that need much processor poke, it’s well capable of running Blu-ray at 1080p with no noticeable artefacts, as well as HD content from other sources. It’s obviously up to Internet browsing and can also stream content from a wide variety of sources, thanks to Clear.fi. 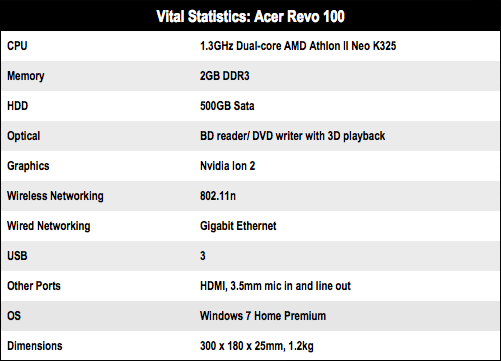