Review Of the three models from HTC for the launch of Windows Phone 7, the Mozart is the one with the 8Mp camera – a step up from the 5Mp snappers embedded in its brethren. 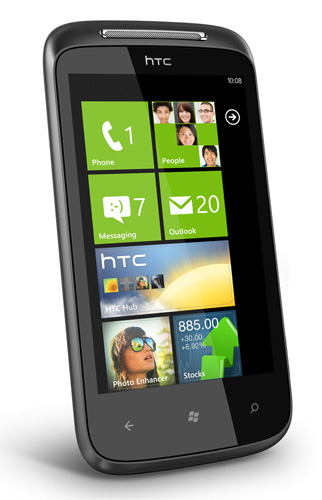 The casing is largely aluminium, with a couple of matt plastic sections on the back for receivers/transmitters, so you don’t get those pesky Apple iPhone 4 reception issues. It feels solid and well built though perhaps not as warm as the HTC Trophy, which has a plastic casing, but feels no less robust because of it.

At first glance its dimensions look much the same as the Trophy too, but it’s actually a sliver narrower and lighter at 119 x 60 x 12mm and 130g and has a slightly smaller 3.7in multi-touch screen.

The usual WinPho 7 factors are on board: 1GHz processor, GPS, accelerometer, Wi-Fi, 8GB memory (but no memory expansion) and as we’ve come to expect, there’s little difference in the user interface, with Microsoft tightly controlling any changes manufacturers might care to make to the operating system.

The HTC Hub offers a few apps you won’t find on other handsets, notably the Sound Enhancer equaliser, which also offers audio enhancements such as Dolby Mobile and SRS surround sound (as it does on the Trophy) but it’s an area that needs to grow if it’s to become distinctive.

Next page: The sound remains the same
Page:
Tips and corrections
26 Comments