Russia has 'secret space warplane' to match US X-37B

Russia has claimed that it too is working on an unmanned pocket spaceplane similar to the US military's mysterious X-37B roboshuttle, dubbed a "secret space warplane" by the Iranian government. 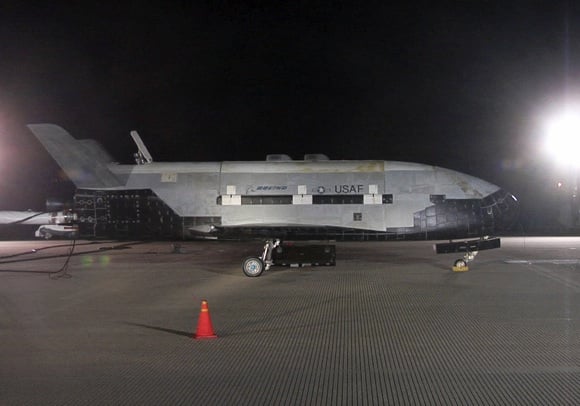 What has the robot spaceplane collected up there?

Flightglobal reports that Oleg Ostapenko, a senior official of the Russian Space Forces, commented with respect to the X-37B's recent maiden flight that "something has been done [by us] along these lines".

The X-37B is a small, winged, heat-shielded spaceplane which is launched into orbit inside a fairing atop a conventional rocket stack – rather than making use of its own engines and strap-on boosters like the Space Shuttle.

Once in space, the X-37B exhibits another important difference from the Shuttle: it deploys a solar array, allowing it to stay in orbit for long periods. The Shuttle's electrical systems were powered by fuel cells, meaning that it was unsuited for long stays in space (unless perhaps docked to the International Space Station).

The first and so far only flight of the X-37B lasted 224 days, with the little spaceplane coming in to land autonomously on a runway at California's Vandenberg military space base last December.

The US Air Force, owner of the X-37B, suggests publicly that the little spaceplane is intended mainly to allow quicker deployment and testing of new technologies in space. Supposing you had come up with a new sensor, for instance: normally it would have to be made as reliable and likely to work as humanly possible, then built into a satellite of its own with solar panels, protection, power systems, communications and all the rest. Only once this had been launched would you have any idea if the new kit even worked. If it didn't, you'd just have to write off the cost of the satellite. Either way, the process would have taken a long time.

With the X-37B you could build a reasonably good effort at the sensor, plug it into the spaceplane and launch it very quickly. If it didn't work you could bring the X-37B down straight away, and possibly fix the duff payload and send it up again fast. If it wasn't fixable, you'd at least have saved large sums on a satellite and on removing all possible risks from the trial package. And no matter what, you'd have got your new technology into space a lot more quickly than you would using normal technology.

Next page: Still though, it is secret. And it has the same wings that the US military insisted on for the Shuttle
Page: