North Africa will need more revolution before it attracts IT tourists

Comment Woo Hoo! Tens of millions of well-educated, young and above all, cheap workers for the capitalists among us to go and exploit! Quick, quick, get out the airline schedule and book that seat to Tunis, or Cairo or – coming soon no doubt – Algiers. Money money money, it's a capitalist world! 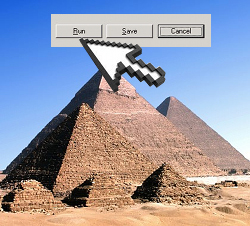 Hmm, what, you mean that's not your immediate reaction to the revolutions in North Africa? Yes, yes, OK, it's very nice that people have been able to overthrow one (and perhaps by the time this is printed, two) corrupt and repressive oligarchies. We should indeed all hope that more follow, liberty and freedom being more important to the dignity of life than mere lucre. And we should hope that the wave of people power continues: I'll certainly not be weeping when Gaddafi Khadafi that Libyan bloke packs the Louis Vuittons and scuttles off to exile.

Musings on the economic and business impact of those being forced to do the dictatorship night flit were prompted by this little report on how Egypt is the number 4 destination on the planet for the offshoring of IT functions. The thing is, management consultants AT Kearney and Gartner weren't being entirely silly in their separate reports. Not as silly as recommending peeps move the computers to a country that will shut off the internet makes them look at least.

The Maghreb (that posh name for parts of North Africa) and Egypt have just what you do want if you're looking for somewhere to place parts of your business. The demographic transition came there later than it has done in most other places: there's a huge population under 30. And in that population there are extraordinarily high unemployment rates. Further, all of the governments got one part of the message about how you should develop a country: educate people. So there are not just young cheap people there, there are young cheap and educated people available there in almost unbelievable quantities. Just the thing to get the capitalist offshoring exploiter salivating at the very prospect.

It's also true that some of the big companies, Microsoft, HP and so on, have had some success with placing facilities in Egypt. Even better, tax rates are low too. Both income and corporate taxes top out at 20 per cent.

So it would seem to be something of a no-brainer: close to Europe, a goodly portion of the younger population speak one or another of the European languages (there's certainly no shortage of rioters who can be propped up in front of the cameras for a “Why we hate Mubarak” piece in the requisite language) and no one is going to have to conduct cultural brainwashing to get the work done. We're not trying to take people from paddy fields to programming after all, these are and have been for centuries complex economies with established middle class, even bourgeois, mores.

But it isn't just my now-more-advanced-than-I-would-like age that means I'm not booking my flight to see how much I can make, as I did when I saw the Berlin Wall fall. For we're not seeing the complete destruction of an insane economic system here, as we did last time. We're seeing a welcome attempt to create a more liberal, more democratic society, for sure, but not the dynamiting of the rules and regulations that make business in those countries so appallingly difficult.

We could argue from the World Economic Freedom rankings. Egypt at 96, Tunisia at 100, Algeria at 132. No, these aren't numbers where the higher we go the better: they're numbers in a listing that only goes to 179 (North Korea) and you should need me to tell you that you'd rather be at the Hong Kong (number 1) end of such a listing rather than the N Korean one.

Note also that political freedom doesn't matter much to these rankings: Hong Kong isn't politically free in any manner at all – while in terms of economic freedom it's about as free as any place ever has been. And you don't need to be a rabid free marketeer like me to agree that there might be a link between this freedom and it being one of the richest places on earth.

I'd say it was directly causal of course, while you might only be willing to agree that there's some link. And it's this lack of economic freedom which makes these newly politically free (of course, given the odds on what happens after a revolution, we don't know how long that freedom is going to last) places perhaps where we don't want to set up our new offices.

The big thing that economists talk about these days concerning growth, about how places manage to get on that path to that greater wealth that we in the rich countries enjoy, is “institutions”. It's a fairly moveable feast, the meaning of this word, and the better development economists (say, Dani Rodrik) point out very loudly that it is not the form of the institutions that matters, it's the function.

Take one of the indicators used in the economic freedom rankings. Say, property rights. It doesn't particularly matter whether these are the English/US Common Law ones, the more egalitarian Scandinavian ones, the familial ones of the Napoleonic Code (all children must get a share of real property for example), or even communal ones as might exist in a nomadic community.

What matters far more than that form is the certainty that whatever the system is will be applied. That is, it's the function which is important, that you know who owns something, that it can be transferred in a known manner and that once it has been transferred everyone agrees that it has been.

As another of the better development economists, Hernando de Soto points out, this just isn't true in Egypt today.

As far as real estate is concerned, 92 per cent of Egyptians hold their property without normal legal title.

Further, if you decide to enter the legal economy, De Soto says:

Large companies can overcome these sorts of problems: indeed, in an autocracy, if you're a big enough company that you can get the ear of the Big Falafel, then these sorts of places are easier to invest in. For having got the ear ... these paperwork barriers mysteriously disappear. A small company trying to do something is going to see itself eaten alive by those 500-day waits for the bureaucracy to allow you to do that something.

Myself, I'd wait for something akin to the Sobchak moment. The North African economies are suffering from something over and above political dictatorship, that thing we're watching being removed. They've been labouring under two or three (depending upon colonial history) bureaucratic burdens as well. Firstly the Ottoman Empire's insistence that the government run the economy by means of price and licence controls. Then, in places, the French attempts to do the same – and finally, since independence, under the quasi-socialist/military alliances that have run most of them. True economic fascism in fact: no, not using it as a pejorative, but as a straight description of that combination of big government, big business and big unions that makes up the system.

Leaving, of course, all those outside those charmed circles entirely screwed, with neither economic nor political freedom.

The Sobchak Moment is a possibly apocryphal story from the early days after Gorbachov's ouster. Anatoly Sobchak was Mayor of St Petersburg and he announced that, from now on, there would be no more need to apply for a licence to go into business. Just get on with it, don't wait for permissions, he said. Of course, you need to send us a letter to tell us what you're doing, for tax and those sorts of reasons, but we no longer require you to submit your plans for approval. In this way the bureaucracy could no longer be the gatekeeper, only the tax collector.

Of course, the next day, the line of those at his offices waiting for permission was just as long as ever: people asking for a letter to prove that they didn't need permission. It's also true that the return of free markets red in tooth and claw has been a little too red and raw, further that the bureaucracy has managed to reimpose itself.

But the basic point remains: until there's something akin to that destruction of the soviet bureaucracy in the North African countries, they won't be places where the small- and medium-sized company can gambol and grow. Yes, political freedom is a wondrous thing, but there'll not be the opportunity for economic growth until economic freedom is instituted as well. ®