iPhone owners get walked through confessional

The Indiana developers of the app – Little iApps – say they "took the Pope's words to heart" and brought on board several priests to guide them on the path to electronic righteousness.

The company's Patrick Leinen described the result as "new media at the service of the Word" offering "an examination of conscience for each user, password protected profiles, and a step-by-step guide to the sacrament".

The app was launched in December, but has now been endorsed by Bishop Kevin C Rhodes of the Diocese of Fort Wayne, which the app's developers reckon makes it the first such application to receive an imprimatur – that is, to be approved by the Roman Catholic Church as being free of doctrinal or moral error. 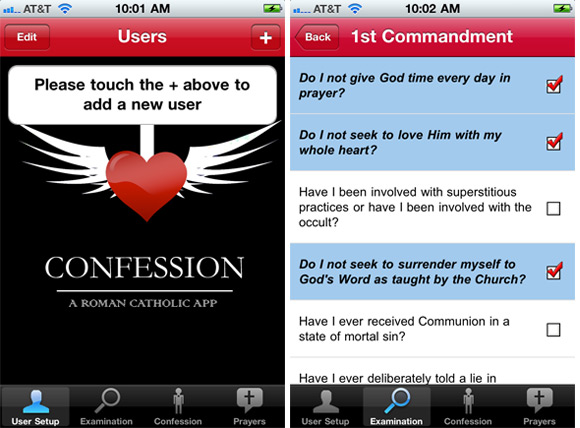 Forgive me, iPhone, for I have sinned ...

In use, the Confession app guides the supplicant though the confessional process, helping them identify the sins of which they are particularly guilty and prompting the forgetful through the process. It was developed with the help of various reverends and pastors, but it is the bishop's endorsement which obviously makes the app worth £1.19.

Confession: A Roman Catholic app can't grant absolution, that's beyond even an iPhone's powers (so far). Unlike Protestants, Catholics aren't allowed to talk directly to their god but have to speak through an intermediary (the aforementioned chap in the dress) who passes on the message, but the app should ensure that the message is comprehensive and properly worded, which can only help.

Down at the Apple app store, one enlightened user says: "As a straying Catholic looking to come back to the Church more fully, this app gave me the extra confidence I needed to go to my first confession. The examination of conscience was a great start in taking a look at my wrongdoings."

Given that finding a decent application is like panning a waterfall for gold these days, endorsement by a major religion is surely a good thing, and we look forward to other faiths joining in with their own recommendations – what kind of iPhone app would Buddha use? ®

* During his 24 January World Communications Address, Benedict suggested to young 'uns that they should "make good use of their presence in the digital world".