Why do they hate science, and why are they so miserable?

Interview Canadian environmentalist Patrick Moore describes himself as a treehugger. As a co-founder of Greenpeace, who was on board the Rainbow Warrior when it was blown up, he hardly has to prove his chops.

He's now published a memoir-cum-manifesto, Confessions of A Greenpeace Dropout. He's in favour of ground heat pumps – every new home should have one – synethetic biofuels and nuclear energy. And trees. Lots of trees, for generating hydrocarbons.

The memoir is a fascinating read, because Moore is better placed than anyone to describe how environmentalism started out with positive intentions, and developed such anti-science and human-hostile beliefs. I caught up with him in New York.

PM: Very positive. I am encouraged by the shale oil discoveries. The International Energy Agency has just said we have 250 years of gas from shale. India has thousands of square kilometers of ancient marine deposits, where the organic compounds are high from the rain of plankton from the waters. It's also rich in uranium – the sea level has sank, and picked up heavy metals – attached to organic matter in solution.

There's also a vast energy supply of uranium in those shale despoits. It was not worth mining because we have shallower and richer ores closer to the surface. But that's another long-term fuel supply.

Haber Bosch is one of greatest breakthroughs in history; there was not enough nitrogen in the organic component of soil. Two-and-a-half billion people are alive now because of the Haber Bosch process.

In the shorter term we have got to stop using our own food as a fuel supply.

AO: On what basis are you optimistic?

PM: There's our ability to modify genetically which may lead to an algae solution, there's a combination of modifying genetics and our already existing knowledge of things like Fischer Tropsch processes, and the thermo-chemical ability to transform materials and compounds.

Fifteen per cent of our energy is already renewable; it's wood and hydroelectric. Some of the biofuel companies are already burning waste wood – there's so much of it, natural wood waste, compared to corn and sugar and starch. Then there's wheat, straw, corn stalks.

I stress trees, because the leaves and needles of trees are the most efficient solar collectors. Trees are the largest biomass on earth. Algae grows fast, but then they die – but trees put on weight each year. If you look at the landscapes on earth, see how much of them are forested. It dwarves everything else.

The most important statistic is that plants convert more energy than humans consume – that's purely by photosynthesis. Solar voltaics are so ridiculously expensive by comparison. They require huge installations. Putting solar panels over vast landscapes turns them into a deadzones, but putting forests over vast landscapes doesn't. It means growing more trees and making more wood, but also for fuel. We don't have to grow monocultures in rows – you could put two or three species in there.

PM: The logical route to go here as oil stocks decline is battery power for light transport and biofuels for trucks buses and aircraft. We would have a problem substituting all fossil fuel with biofuels.

The move to make battery-operated cars is very important – then we can use nuclear or other sources. These don't have to be personal vehicles. We can start with delivery vehicles making journeys into the city, bringing all of the food into the stores. These can be battery operated, as they're on fixed routes, and regular schedules – so they can be charged. For personal transportation think Renault's approach is the most practical. They have a swappable battery. You wait four hours ... take battery out and ... pay for the charge plus overtime the battery gets for biofuel. 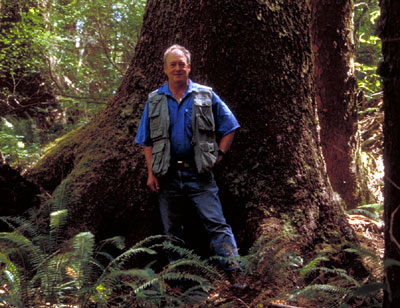 AO: People aren't used to thinking of oil as a renewable energy source just yet – biofuel is still associated with ethanol.

PM: Now Greenpeace and other groups have done a complete about-face on biofuels, and are now opposed to them. They're spreading misinformation on Indonesian oil palms. But look at Britain. It was once almost 100 per cent forested. The British landscape is now beautiful – there's not much forest compared to what it used to be. Yet the Indonesians are taken to task when they clear forest to grow fuel and for fibre. Well, there's a reason countries such as Indonesia are called developing countries – it's because they're still developing.

Palm oil is the most efficient in terms of energy per hectare. It's even more efficient than sugar cane in Brazil, it takes less land.

Greenpeace should promote it. But they've swung way over to the other side of that argument, now. The reason food prices have gone up is not because we're turning food into biofuels, it's because of oil prices. It's one of the primary inputs into agriculture, every tractor has to buy more expensive oil and diesel. A bit better analysis from Greenpeace would be in order.