Apple's cofounder is currently using six in-car navigation systems, trying to decide which one plots the best route, and he carries as many as six cell phones. Each time one of his handsets is spotted in public, it generates fresh buzz among those desperate to find hidden meanings, to see how far Woz has strayed from the path of the sacred iPhone.

But, yes, the iPhone is his favorite. And he can't wait for a white one.

Wozniak's passion began early in life, when he stumbled onto his dad's engineering magazines and found a computer inside. And when we say computer, we mean computer in the old sense of the word - not some natty little device you can slide in the hip pocket of your Mad Men-inspired narrow-cut trousers. This computer couldn't even fit on a desk.

It was the early 1960s, when most computers came in one size - room-size - and you needed the spending power of a small government to buy one. The first digital computers – machines without any moving mechanical parts – were only beginning to appear. 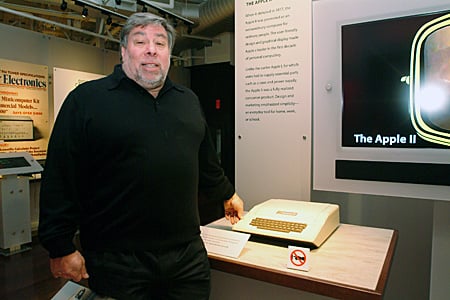 "I said 'Oh my God, this stuff is just so beautiful'," Woz told us during an interview at the opening of the Computer History Museum's exhibition Revolution: The First 2000 Years of Computing, remembering the machines in his dad's magazines. "[They showed] how a little learning and little tiny items add up and are put together to build more complicated things."

But Woz loves more than just the bits and bytes. He loves what computers can do for people. A pioneer in the early personal-computer revolution, he took those room-sized machines and shrunk them down to a reasonable size – and gave them a reasonable interface. He built the Apple I and II in 1976 and 1977 with an aim towards making computing accessible. It was time to shift computing power out of the hands of the rich and powerful elites, and put it at the fingertips of individuals who had relatively little money and few - if any - programming skills.

"I couldn't be prouder of anything more than that in my life," Woz says, looking back on the Apple I and II. "It was a big cornerstone in my life to be worried about the person at home having as good appliances as the military or the big business [who had] all the money."