OpenStack co-founder Rackspace is buying the brains behind the other half of the open-source cloud project, in a deal that radically alters who runs the initiative.

The Reg has learned that Rackspace is buying Anso Labs, the tiny software and services specialist who designed and built the Nova compute fabric that underpins NASA's Nebula private cloud.

News of the deal was leaked by a Citrix OpenStack community member in a blog post that was subsequently edited to remove mention of the deal. The Reg found a fragment of the blog in Google cache, below, and spoke to Rackspace. On Wednesday afternoon, the company confirmed the deal . 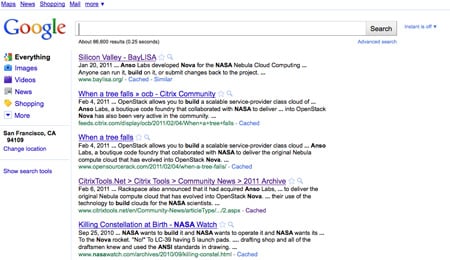 The acquisition is intended to speed up development of the OpenStack compute fabric, which is lagging the other main component: Object Storage, which was originally built by Rackspace.

This is Rackspace’s second acqustion in recent months. The company bought cloud-management start up Cloudkick in December.

The Reg understands from OpenStack community members who wished to remain anonymous that Rackspace's own project leaders are coming under pressure from their board to show that OpenStack has some value to the company.

Seven months into OpenStack, Cisco and Canonical just became the latest to join a long list of project members. But it will be at least another year before the compute fabric is in a state where it can be considered mature enough to brought in house and sold as part of Rackspace's cloud.

A consequence of the Anso deal, however, is that Rackspace is left in a significantly stronger position running the whole OpenStack project.

Despite the long list of OpenStack members, Anso employees are among the top contributors of code OpenStack.

And, while much of the credit for Nebula was given to NASA at the time of OpenStack's launch, The Reg has now learned NASA's cloud was designed and built by Anso, which was a contractor to the US government. Anso's site says it now maintains Nebula.

That will alarm those in the OpenStack community already worried Rackspace has far too much control of a project that's supposed to be run by and for the community. OpenStack is under the Apache open-source license.

These concerns will received added impetus given the project's now expanded to include Cisco and Ubuntu maintainer Canonical on the heals of giant Microsoft and others. Cisco and Microsoft will be unwilling to see a single company running a project they've now got a vested interest in.

It is unclear whether the governance process will change to compensate for the new order. OpenStack has just finished a project-management revision process that saw the currant board and oversight committee formed at the end of 2010. ®

Update: This story has been updated to correct the description of OpenStack's project oversight committee.