Joyous news from the European Space Agency today, which reports that it has successfully landed three astronauts on Mars. Sadly this is only simulated Mars: the three spacesuited pioneers are at present exploring a large indoor sandpit, having spent the previous eight months inside a wood-panelled simulator pretending they were in transit to the red planet. 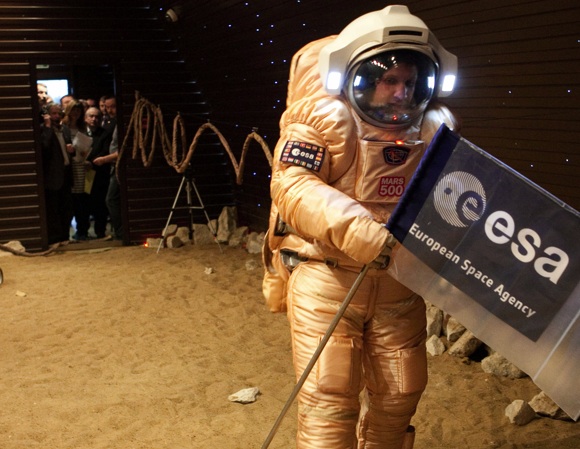 On 8 February, three of the six human guinea pigs confined within the Mars500 spacecraft simulator complex at Moscow's Institute of Biomedical Problems transferred into the "lander" module, which then made a four-day simulated descent to the surface of the Gusev crater - which on the real Mars is home to NASA's crawler robot Spirit, which apparently finally expired during the recent Martian winter after becoming bogged in a sand trap.

This morning the three Moscow sim-nauts in the "lander" donned Russian-made Orlan spacesuits and stepped out at last into the reddish sand carefully prepared for them in an upstairs room of the Mars500 complex.

“Today, looking at this red landscape, I can feel how inspiring it will be to look through the eyes of the first human to step foot on Mars," said Diego Urbina of Italy as he stepped into the sandpit. “I salute all the explorers of tomorrow and wish them godspeed.”

Next page: Cabin life aboard the wooden spaceship
Page: