Bone-fancying boffins in the States have issued an impassioned call for the world of paleontology to standardise on a digital file format for 3D images of fossils before it's too late. 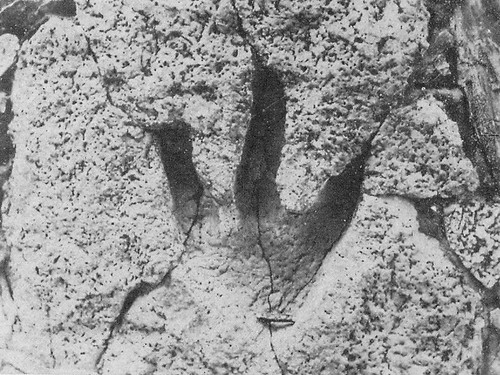 Until recently, fossils were recorded by investigating boffins using moulds or casts of plaster or rubber. But such records are cumbersome, taking up a lot of space and difficult for scientists around the world to examine easily. Furthermore, the process of record-taking is invasive and priceless relics of the ancient past can be damaged.

The answer, says paleontologist Thomas Adams, is 3D laser mapping to produce a digital record of important fossilized dinosaur bones, footprints, eggs etc. Many modern bone-botherers employ such techniques, but there is no agreement on formats and thus the records so generated may not be usable in future.

"Currently there is no single 3D format that is universally portable and accepted by all software manufacturers and researchers," write Adams and his colleagues in a new paper, in which they set out their suggestion for a new standard fossil-scan format.

In order to demo their technique, the scientists imaged a well-known fossilized dino footprint in a slab of stone which is built into a bandstand in Texas. This footprint was originally investigated back in 1935, but, illustrating Adams and his team's point, the moulds and casts made back then are now lost. Meanwhile, the footprint is gradually crumbling away due to being outdoors in all weathers.

A statement from Souther Methodist University (where Adams works) accompanying the research outlines the methods the boffins used to image the print:

Adams and his research colleagues took a portable scanner to the bandstand site to capture the 3D images. They employed a NextEngine HD Desktop 3D scanner and ScanStudio HD PRO software running on a standard Windows XP 32 laptop. The scanner and laptop were powered from outlets on the bandstand. The researchers used a tent to control lighting and maximize laser contrast.

Because of the footprint's size — about 2 feet by 1.4 feet (64cm by 43cm) — multiple overlapping images were required to capture the full footprint.

Raw scans were imported into Rapidform XOR2 Redesign to align and merge them into a single 3D model. The final 3D model was derived from 52 overlapping scans totaling 2GB, the authors said. The full-resolution 3D digital model comprises more than 1 million poly-faces and more than 500,000 vertices with a resolution of 1.2mm. It is stored in Wavefront format. In that format the model is about 145MB.

The findings, complete with 3D image "digitype" are published in the online paleontology journal Paleontologia Electronica. The e-journal also offers the footprint in QuickTime VR format, and a pdf of the original 1935 paper – itself no longer in print. ®