Gunning for Opterons high and low

Advanced Micro Devices was not the only server chip maker in the x64 racket that updated its chips for Valentine's Day. Yesterday evening, chip giant Intel slipped out a blog posting announcing that it too had tweaked its server chip lineup.

The Westmere-EP chips have a set of native cryptographic instructions that implement the Advanced Encryption Standard (AES) algorithm for encrypting and decrypting data. These server and workstation chips also have taken the Trusted Execution Technology (TXT) security features from the vPro business PC platform and hardened it so it can be used to secure virtualized server environments, preventing the insertion of malicious software prior to the launching of the hypervisor when a server boots.

The Xeon quad-core E5607 and E5606 chips and the dual-core E5603 chip, shown in the table below, now have these TXT and AES features, which is what makes them different from the E5507, E5506, and E5503 chips they replace. (The newer chips also have two dud cores on them that BIOSes and software can't see because they don't work.) 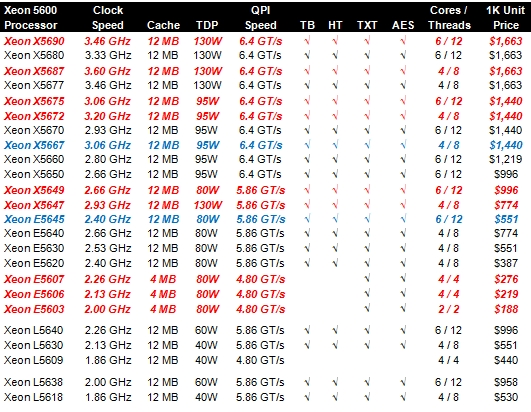 The new top-end Westmere-EP part is the X5690, which Intel was sampling last summer. This is a six-core, 12-thread chip that runs at 3.46 GHz, about four per cent more raw clock oomph than the X5680. These chips are rated at 130 watts using Intel's Thermal Design Point power rating.

The slightly faster X5690 has the same price as the X5680, which means the extra oomph passes straight through as better bang for the buck. Intel has also launched an X5687 part, which has only four cores activated and that clocks at 3.6 GHz. That's four per cent faster than the quad-core X5677 it replaces. All four of these chips cost $1,663 each when you buy them from Intel in 1,000-unit trays.

The X5675 and X5672 parts, which have six and four cores, respectively, running at 3.06 GHz and 3.2 GHz, are perhaps more interesting in that they fit into the standard 95 watt TDP envelope.

If you look at Intel's chip price list, you might get the impression that the four-core X5667 and the six-core E5645, were launched today. But these chips, shown in blue, were launched last March with the rest of the original Westmere-EPs.

All of the new Xeon 5600 chips, which are implemented in Intel's 32 nanometer wafer-baking processes, are socket-compatible with the existing Westmere-EP platforms and their LGA 1366 sockets. Vendors will start rolling them out into their server platforms as soon as they are certified. ®