Mozilla: 'Internet Explorer 9 is not a modern browser'

Mozilla has taken a right swipe at Microsoft's Internet Explorer, telling the world that the latest incarnation of IE is not a "modern browser."

On Tuesday, with both Firefox 4 and IE9 on the verge of official release, Mozilla technical evangelist Paul Rouget hit back at apparent Microsoft suggestions that the new IE offers more extensive HTML5 support than competing browsers. "Is IE9 a modern browser?" Rouget writes on his personal blog. "NO."

To back up the claim, Rouget offers up a (rather extensive) graphic that references standards-happy tests from across the web, including caniuse.com and html5tests.com. And he provides a laundry list of standards IE9 doesn't support, including Web Workers, offline Application Cache, HTML5 forms, JavaScript Strict Mode, the File API, and WebGL.

Asked to comment on Rouget's claims, Microsoft said that IE's approach to HTML5 is meant to suit real-world practices. "We spent much time researching and looking at what developers are building today and what they want to build tomorrow to define what we build in Internet Explorer 9 today," reads a statement from the company.

"We used that research to inform our view of HTML5 and the pieces that matter most to designers and developers in building these next set of experiences on the Web. In terms of HTML5 defined, it remains a combination of what developers will want to do and the definitions set forth by the W3C as the ultimate authority in defining standards for the Web."

In other words, the old browser rivals are at it again.

In announcing the IE9 release candidate last week, Microsoft pointed out that it has developed several thousand new tests for JavaScript, HTML5, and other standards – tests it wants to include in the official W3C suites – and it published a table comparing IE9's performance on these tests to the performance of competing browsers:

Rouget takes issue with the table, saying it falsely implies that Microsoft does web standards better than the competition. "Does IE9 support 99% of the HTML5 specification as insinuated by Microsoft?" he writes. "No, they're actually pretty far from it. The tests Microsoft are referring to are the ones they created during the development of IE9. It's not that surprising that they pass the very tests they used to design and develop the browser."

Mozilla, Rouget pointed out, does well on its own unit tests too. But unit tests, he says, aren't designed to give an overview of how well a browser adheres to the length and breath of a web standard. "The primary use case for [Microsoft's] tests... is to spot regressions and validate code changes. In other words: the tests ensure that future changes don't break the things you just built. They don't actually test all elements of a specific standard."

To actually test all elements, he says, you need caniuse.com: 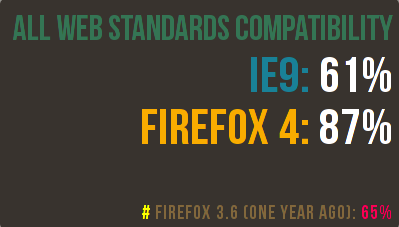 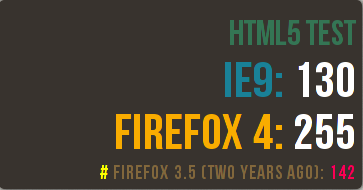 These tests, he says, should not be confused with either Microsoft's test drive suite or existing W3C compliance tests. "W3C tests are here to be used as reference to develop a browser engine, but inadequate to represent the whole implementation. "Rouget tells The Reg via email.

"Maybe you'll have 900 tests about a simple DOM event, and 100 tests about the Video API. Passing only the tests about this DOM event doesn't mean your score is 90 per cent, because the number of tests and the importance of the features are different. Caniuse and html5tests are good to 'formulate' a good overview of how good a browser is. These tests are balanced."

IE9 is now offering the HTML5 <video> tag, the <canvas> tag, SVG, and parts of CSS, Rouget says in his blog post, but other vendors have long offered such support. "The reality is that IE9 is two years late," he says. "Canvas and SVG existed five years ago."

The graphic does point out that unlike Firefox, IE9 handles text-overflow. But this comes after Rouget's laundry list of standards that IE9 doesn't support. "That's why I don't consider IE9 a Modern Browser," he says.

Rouget acknowledges that Microsoft's test drive suite is useful. Mozilla even uses the tests for Firefox development. And like other Mozillans, he points out that IE9 is a big improvement over IE8. But he's really quite annoyed at the implication that IE9 is somehow more standards-compliant than Firefox and other major browsers.

Of course, Microsoft is on record as saying that caniuse and html5tests are inadequate because they merely test for the existence of features and nothing else. It's the old tit for tat.

The whole HTML5 marketing battle is wonderfully amusing, especially when you consider that the HTML5 spec won't be completed until 2014 and that Microsoft, Google, and even the W3C insist that HTML5 includes all sorts of stuff that isn't HTML5. At times, Mozilla seems the only voice trying to straighten it all out. But one wonders if anyone is listening. And if the minutiae of it all really matters. ®

The Sun is shining, the birds are singing, and Microsoft has pulled support for Internet Explorer in Microsoft 365

Internet Explorer 3.0 turns 25. One of its devs recalls how it ended marriages – and launched amazing careers

Microsoft drives users to the Edge: Internet Explorer to redirect to Chromium-based browser in November

Ignite Sure, it's still wedged in the OS, but maybe you'd prefer something shiny and Chromier?
Legal24 Sep 2020 | 21

You need to give that plate back to us after you've finished your cake. Yes the fork too. We'll get your coat
Software18 Aug 2020 | 45