'Everybody' will move to the heavens

Interview It was a Google ad. But not the kind you've come to expect. Last month, inside The Economist, a magazine in the old fashioned, physical sense of the word, Google ran a four-page ad touting its own Google Apps suite, that all-web-all-the-time challenger to Microsoft Office. "Each day, over 3,000 businesses go Google," the ad read, hailing the more than three million outfits who have adopted the suite since its debut in 2007, and listing more than a dozen by name.

"We believe that 100% web is the future of the cloud computing model, and brings substantial benefits for companies that no other IT model can provide in terms of simplicity, cost, security, flexibility, and pace of innovation," read a signed missive from David Girouard, the president of Google's Enterprise business. That "100% web is the future of cloud computing" bit isn't quite the tautology it might seem. It's a swipe at Microsoft's new Office, which famously straddles desktop and web.

Google's empire is built on web advertising. In 2010, ninety-six per cent of its $29bn in revenue came from online ads. But Google Apps is different. Google sells subscriptions to enterprises, applying its web know-how to a market traditionally controlled by a very different kind of software company. And it's actually using print ads – not to mention billboards – in an effort to shove its way past likes of Microsoft and IBM.

Mountain View has purchased print ads trumpeting the Google Apps suite in other magazines, on other occasions, but the Economist ad – all four pages of it – is part of a renewed push. In November, Google actually sued the US Department of the Interior, claiming the government agency didn't give Google a fair chance to win the $49.3 million contract it awarded to Microsoft Office. And last month, it removed a clause from the Google Apps terms of service that allowed for scheduled downtime – an unprecedented move meant to show that the suite is more reliable than the traditional competition.

In a recent interview with The Register, David Girouard acknowledged that the company has turned up the volume of late. "It's not that we haven't been promoting [Google Apps] all along," he said. "But we also have been cognizant that the product needed to mature. We've been in the market with our cloud apps for almost four years now, and the products are maturing and getting better, and I think that over the course of 2010, we got the confidence that these products really worked.

"Our renewal rates were extraordinarily high, and our customer satisfaction went up. You don't want to turn on too much of the gas, too much of the messaging, until you're really confident. Through the course of 2010, we really got it there."

He admitted the suite still has its flaws. He gave his own company a "B" on customer support, for instance, and he acknowledged there's an interface "trade-off" when you switch from a traditional desktop suite, meaning the interface can't quite match what you get from a local app. But he argued there are many areas where Google Apps is superior to the competition, citing not only limited downtime but security, and in an echo of that Economist ad, he was quick to point out that the suite is already in wide use.

"A lot of the world doesn't appreciate that this stuff is here for real," he said. "We're trying to make sure people see that the cloud – these cloud applications – aren't conceptual things of the future. It's happening at a large scale." 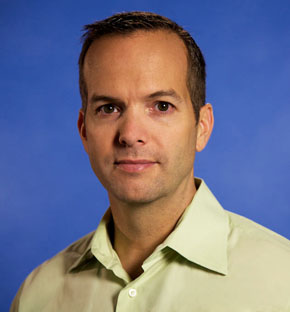 How large? He wouldn't exactly say. According to that ad, 3,000 business are moving to the suite each day, and over three million have moved since its debut in 2007. But it's unclear how much revenue Google is generating from subscriptions. All we know is that it's under $1bn a year, less than four per cent of the company's overall revenue. The aim, however, is to create a multi-billion-dollar business – in the near term. "Not a decade from now," Girouard said, "but within a few years."

Eventually, he said, "everybody" will adopt so-called cloud applications – though this will require a sea change in the way many view the web. "You have to build confidence over time," Girouard said. "The reality is that everybody will be doing it. It's like using a telephone. You don't think twice about using a telephone for business purposes now, but it used to be considered strange."