UK copyright law needs an overhaul to bring it into line with pre-industrial cultures, says a top legal academic. It may strike you as the Most Imaginative Use of Politically-Correct Rhetoric you've ever heard, but the joke is ultimately on you: the project has won funding from the Department of Business.

The study, Who Owns The Orphans?, is led by Professor in International Intellectual Property Law Uma Suthersanen. She's a veteran of a dozen advisory panels on copyright law, and Solicitor to the Supreme Court of Singapore. Here, she floats this idea:

"Indigenous and ethnic groups not only cultivate and preserve traditional knowledge but also create traditional but contemporary art by constantly recreating, reinterpreting and adapting earlier forms of expressions, in response to their environment and their interaction with nature and their history."

She notes that Western ideas of creators' rights respect the individual creator. The response is to seize ownership of copyrighted works collectively, for the common good - and the question she poses is not if, but how. 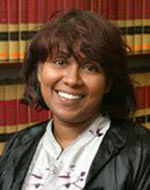 "When a work is designated as 'orphaned', it suffers a relative loss of 'parental control', and such a work might be taken 'into care' by the government, collecting societies, or other organisation," Suthersanen elaborates, making it sound like the social services as explained by Blue Peter to a seven-year-old.

The project has raised the ire of photographers - professional and amateur - who argue that most of the photos floating around on the web are "orphans", in that the metadata or other identifying information is missing. We'll come to this fightback in a follow-up article, pausing here only to note that photographers have no trade group - a BPI or MPAA - or a powerful member-owned collection society to fight their corner.

Back to Suthersanen, then. What does she mean?

In touch with nature. But not royalties

A questionnaire gives some clue to her thinking. It's a collection of ideas, some of which are old, and some of which are more recent. She is comparing a folk tradition with the evolution of a sophisticated set of Western social and legal ideas. The pre-industrial sharer has it right, and we have it wrong, she implies.

There are important differences. The Western tradition that's evolved over a couple of hundred years allows the creator to be rewarded with real money - which is very useful for paying the rent or groceries in a modern society. Creators can participate in the economy. People with original ideas, or who come up with novel forms of expression are given a chance, (but not a guarantee) of economic independence.

Removing this independence makes the creator dependent on corporate patronage or other funding. Suthersanen herself has this sorted, we can't help but notice: BIS funding for this project was funnelled through the Arts Council's Research unit.

Independence may not be a concern to academics who have spent their lives funded by the state - but not everybody shares such good fortune, or even thinks good art comes out of the other end of such an arrangement. Both corporate and state funders would be restored to their former role as cultural gatekeepers.

Secondly, Suthersanen sets up something of a false dichotomy. The Western economic framework for copyright is also very flexible. Contemporary culture, particularly pop music, makes great use of "recreating, reinterpreting and adapting earlier forms of expression"; yet it does so by retaining the right to be rewarded if somebody profits from your originality. Nor has our own folk tradition suffered within this framework - Western folk art now reaches further than ever before.

"The most sacred, the most unassailable and the most personal of possessions is the fruit of a writer's thought," the French Revolutionaries wrote. Who Owns The Orphans? disagrees. The questionnaire defines "creators" not as the people who come up with the original idea - but who uses somebody else's original idea. But venerating so-called primitive customs over our own does more than simply value continuity over authorship, it establishes a false choice.

The justification for the range of changes proposed is also very peculiar, and suggests a fistful of contemporary intellectual prejudices.

Next page: It's only natural
Page: