Internet use disrupted in Bahrain as protests turn bloody

Internet traffic in and out of Bahrain showed a marked decline that coincided almost precisely with this week's start of citizen protests demanding government reforms in the small Persian Gulf country.

Internet backbone traffic measured by Massachusetts-based Arbor Networks dropped by as much as 20 percent beginning on Monday, according to Jose Nazario, senior manager of security research at Arbor. A chart provided by the company, which monitors traffic from about 120 internet service providers throughout the world, showed data flowing in and out of Bahrain that was 10 percent to 20 percent off average peaks. 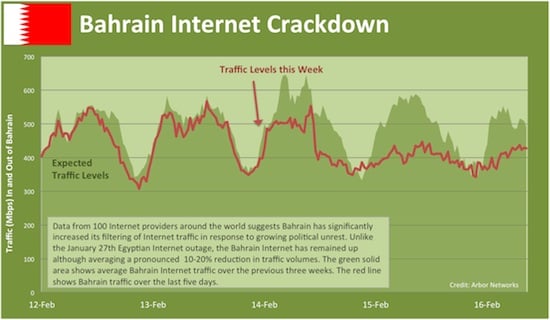 “It's not a whole shutdown like we saw in Egypt,” Nazario told The Register. “It is a somewhat selective filtering. If that's filtering, if that's circuit problems or whatever we don't know.”

Nazario was referring to Egypt's wholesale unplugging of the internet during two weeks of protests demanding the ouster of President Hosni Mubarak. By contrast, internet traffic in and out of Bahrain is merely being curtailed.

Nazario said the disruption is consistent with the filtering of large websites used by protestors. It could also be the result of internet service being shut down or throttled to end users. New York Times columnist Nicholas Kristof on Friday tweeted: “My hotel has zero internet, but some homes have connections.”

The disruption came on the fourth day of protests in Bahrain. On Friday, according to numerous news reports, at least five people were killed as soldiers opened fire on protesters defying orders to disperse.

Customers of Bahrainian telecom provider Batelco, faced internet “service degradation,” according to Middle Eastern blog Bikya Masr, in what many believe “is the direct action of the government to curtail the widespread and growing movement against peaceful demonstrators.”

The Bahrainian government has also blocked access to content sharing sites such as Bambuser, according to the NYT. ®