'Designed with the future in mind'

ISSCC Everyone else might have pretty much abandoned the Itanium processor, but Intel and Hewlett-Packard – who co-designed the 64-bit processor – remain firmly committed. That's mainly because HP has a captive audience of HP-UX, NonStop, and OpenVMS customers that spend billions of dollars a year on systems and therefore make it worth Intel's financial while.

The future "Poulson" Itanium processor will close out the Monday sessions devoted to enterprise processors at the IEEE's International Solid-State Circuits Conference in San Francisco, but to keep the Poulson Itaniums from getting lost in the CPU news shuffle, Intel gave press and analysts a sneak peek at some of the details it will divulge at ISSCC.

Poulson is, as many expected, an eight-core processor, but it is not just a shrink of the current quad-core "Tukwila" Itanium 9300 processor that launched at last year's ISSCC event. The Poulson chip not only skips a few tick-tocks in the normal Intel pattern of alternating architectural changes with chip manufacturing process changes, but is doing a tick and a tock at the same time. Or, more precisely two tocks and a tick at the same time, since the jump from the Tukwila chips involves moving from 65 nanometer wafer baking techniques to Intel's current (and high volume) 32 nanometer processes, skipping 45 nanometers entirely.

Those are the tocks. The tick is the new Itanium microarchitecture and a completely redesigned core that goes along with it.

The Poulson chip is the ninth in the Itanium family, which is more than a decade old and which was intended to replace x86 processors in the glorious future painted by Intel, HP, and the other Itanium partners back in the mid-to- late 1990s. That didn't happen, obviously, and everyone else that had adopted Itanium beside HP has backed Intel's high-end Xeon 7500s for everything but the proprietary platforms they don't want to move to another chip architecture. Again.

While Itanium did not change the world directly, it sure did indirectly, giving Advanced Micro Devices a chance to get its 64-bit Opterons into the field because of Itanium incompatibility with Xeons and the many delays in getting Itanium chips into systems. The initial success of the Opterons made Intel refocus on the performance, power consumption, memory addressing, and RAS features in the Xeon line, and in the end, the market ended up with a very respectable Xeon, Opteron, and Itanium lineup, providing different systems suited to different needs and giving HP, Bull, and NEC very profitable proprietary machines.

If Intel could sell a chocolate chip cookie as a processor to HP, and it worked and it cost $3,700, it would do it. Intel doesn't care. And at the prices HP charges for Integrity and Superdome 2 systems, the server maker is perfectly happy to stick with Itanium - just like Oracle/Fujitsu can command a premium for Sparc systems and IBM can for mainframe and Power systems. Itanium didn't take over the world, but like these other RISC and mainframe platforms, it sure has taken over its niches.

In a briefing on the chip, Rory McInerney, vice president of Intel's Architecture Group and director of microprocessor development, said the Poulson chip involved a "substantial redesign" and that Intel "designs this with the future in mind." What McInerney meant by that later statement is that the microarchitecture design changes and core layout will allow Intel to scale up to the future "Kittson" Itaniums and beyond over the next couple of years with whatever chip making processes it has in volume at the time. 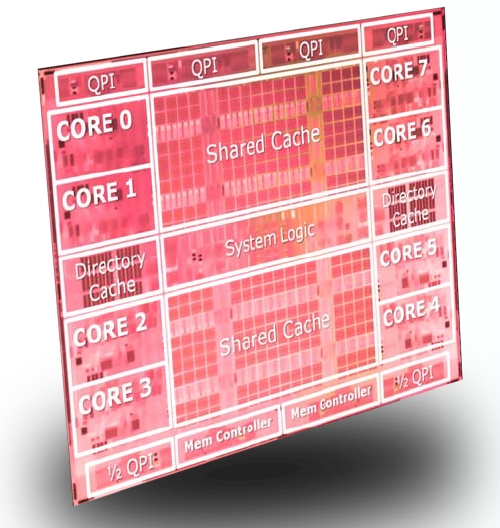 The Poulson chip has eight cores, two directory caches, five QuickPath Interconnect (QPI) links, two memory controllers, two shared L2 caches, and a bunch of system logic all on the same piece of silicon. It weighs in at 3.1 billion transistors, and is 588 square millimeters in size. The current Tukwila Itanium chip, by comparison, has four cores, a total of 2 billion transistors, and is 700 square millimeters in area. The double shrink from 65 to 32 nanometers allows for a lot more stuff to be crammed onto the chip, and also a reduction of the size of the chip by about 20 per cent and a slight reduction in the thermal design point, which drops from 185 watts with top-end Tukwila parts to 170 watts with the fastest Poulson parts.

McInerney said that Intel is not divulging clock speeds on the Poulson chips at this time, but presumably the shrink will also allow Intel to boost the clock speed on the chips a little bit. Probably less than a 20 per cent boost, since the relationship between clock speed and heat is logarithmic, not linear. Or, Intel might be using the extra transistors to implement a better variant of HyperThreading, with perhaps four threads per core as IBM has done with its Power7 chips. But the core design, discussed below, indicates that Intel is less concerned about clock speed and more concerned about how much work gets done per clock and how little energy it can take.