Europeans far less keen on Android than Americans are

How have the great mobile operating systems been faring in the UK and Europe over the past year? Mobile internet access gives us a picture.

The snapshot isn't an unbiased one, mind. The data comes from StatCounter, which tracks what browsers, operating systems and so forth are used to access the 3m-odd webpages which it claims make use of its free visitor counter.

The obvious caveat aside - that StatCounter-tracked pages may not be representative of the whole - let's see what the numbers tell us.

We've masked the point-by-point numbers for clarity. In any case, what matters is the relative spacing of the lines, not the precise percentages. 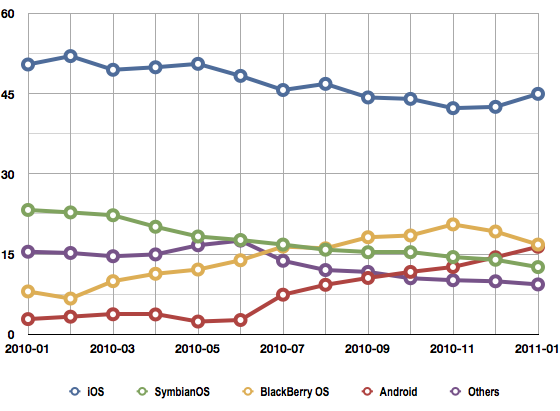 And it's interesting to get some Euro-centric figures. Global sales tend to mask regional trends. The other most common data-set, for the US, gives a very slanted view of the market.

Europe as a whole clearly favours iOS - its market share has run between 50 per cent and 45 per cent between January 2010 and January 2011 - which is well ahead of nearest rivals Symbian, BlackBerry and Android.

It's no surprise to see the decline in Symbian usage - any more than it is to see the rise in Android mobile browsing, but BlackBerry usage certainly appears to have peaked, hitting 18 per cent and then falling back. And while Apple's share is trending downward, it's a very gentle decline. 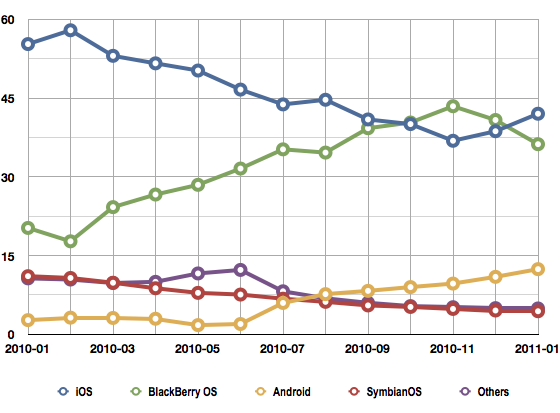 In the UK, Apple and Research in Motion are the two key smartphone players, each battling the other, with one's rise accompanies by the other's fall, oscillating about a line at 42 per cent.

Android usage is growing here too, but it's still below 15 per cent and has only just begun to get clear space ahead of its nearest rivals. But it is rising, and that will push down the line over which iOS and BlackBerry are fighting.

Crucially, the strength that Android is showing in the US, is not yet a factor in the UK and Europe. That may change over the coming year, but the Google OS is going to have to gain a lot of support if it's to mount a serious challenge to Apple and BlackBerry here, and against Apple in the wider continent. ®