Say hello to the BarBot, which combines alcohol and gambling to form what could be a seriously addictive bit of kit. Instead of winning money, users are rewarded with a cocktail. Things could get messy.

The BarBot won a hacking competition called "Take on the Machine", sponsored by Vimby and Scion. It started life as a decommissioned slot machine sold on Craigslist, which a team from hacking collective NYC Resistor decorated with a Fear and Loathing theme and programmed to pump out drinks, Popular Science reports. 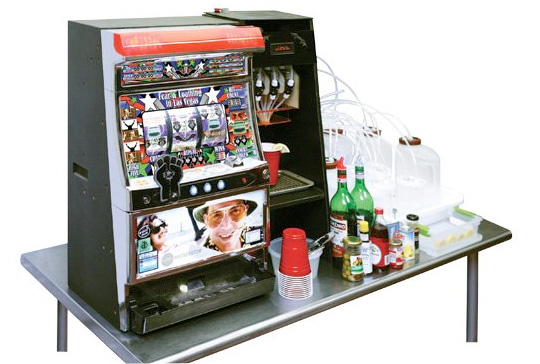 When a winning combination is reached, the computer sends ingredients and proportions to a microcontroller that acts as the barman, directing liquids through nozzles to finish the drink. An LED display then lets the winner know what's been made, accompanied by lines from Fear and Loathing.

"As your attorney, I advise you to spin".

The three wheels are programmed to stop only on mixes you'd traditionally find in a cocktail bar, so as fun and potentially disgusting as it could be, you won't end up creating a Bloody Wallbanger, or a Moscow Screwdriver, for example.

Still, in the hands of the wrong people - namely British teenagers - this machine could be lethal.

The BarBot cost $3000 to create and took 320 hours. For more details on the Take on the Machine competition and the five entries, including a Wallace and Gromit style breakfast setup, check out the video on Vimby. ®