Fusion-io's ioMemory technology adds flash chips to a PCIe card that becomes an intermediate tier of memory between a server's DRAM and its hard drives, accelerating server applications through changing disk I/Os into much faster flash I/Os.

The company's products are used by server vendors Dell, HP and IBM, and customers such as Facebook, MySpace and Zappos.

Wozniak was asked about Fusion-io on an Engadget Show video. 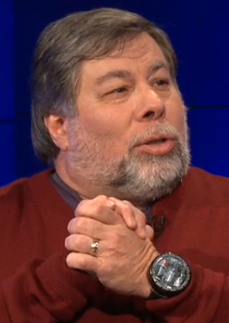 Fusion-io – I love that company ... I'm with this company that's taking ... basically the leading company in the world to take NAND flash chips on boards that plug into servers and just wipe out all the high-speed, expensive hard disks there are.

"You'd be surprised if a 10th of the internet traffic that you're using in this room is coming off of our Fusion-io boards and not off a hard disk, in two-and-a-half years of sales. You'll hear a lot more about this company ...

He also said that Fusion-io's products were not cheap. However they cost less per GB than DRAM and can be cheaper to own and operate than the many tens of hard drives they replace for I/O-intensive applications. The company has said it has shipped more than 15PB of its flash products in the past year.

We speculated about a Fusion-io IPO last year. Now El Reg guesstimates that we'll see it happen before the end of 2012, possibly well before. ®