Apple will uncloak the next generation of its überpopular fondleslab, the iPad, on March 2 in San Francisco.

This news comes to us from The Loop, which – clearly being on better terms with Cupertino than The Reg – received its invitation to the event on Wednesday morning. 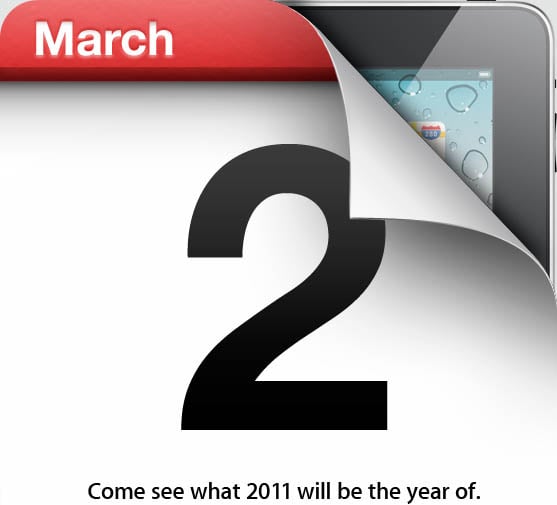 It's not hard to guess what might be discussed at Apple's March 2 event, eh?

The invitation art, above, is unusually direct for an Apple event, showing as it does an iPad behind a peeled-back version of the iPad's Calendar icon. Jobs & Co normally tease prospective event attendees with more-inscrutable comes-ons, such as those for past events that announced the upcoming Mac OS X Lion and the current iPod lineup.

The invitation comes hard on the heels of rumors that the iPad 2 would be delayed by up to two months – rumors that were quicky rebutted by The Loop.

Of course, when the iPad 2 will actually hit store shelves is anyone's guess. Those "sealed packages" said to be winging their way to Apple resellers are most likely upgrades to the MacBook line, and not iPad 2s.

The rumor mill has been churning with purported features of the second-generation Cupertinian tablet: a slimmer and lighter build, more RAM, a snappier processor, front- and rear-facing cameras, and a less-reflective screen – which would be much appreciated by those of us who use our iPads primarily for Kindle, Instapaper, and the like.

There have even been rumblings and mumblings that the iPad 2 might have a Light Peak port – but we'll call foul on that speculation. Odds are that spiffy, speedy connection tech will first be seen in the MacBook line, as The Reg reported early Wednesday, and will be given the less-than-spiffy moniker of Thunderbolt. On Thursday, Intel will host a presser that will likely include a Light Peak announcement. ®