All hail our cloud computing overlords

Pray that the IT priests beat the beancounters

Who will win the battle? 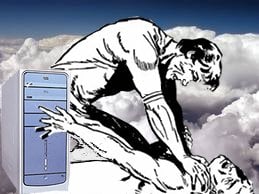 There can be only one...

Which brings us back to cloud computing. Almost by its definition it will be the large organisations of this world that really take to it: which means that it ain't gonna be the individual user who decides which, if any, of the systems get used. It is going to be something of a battle between the IT bods side, arguing for quality, and the accounting side, arguing about price.

And who will win that battle? Who will be able to steer the decision about the various competing suppliers, and which way will it go, between quality and price? Which of these will determine whether competition in cloud computing leads to a price-driven race to the bottom or a quality-driven race to the top?

I think we all know the answer to that. For the sake of all our economic futures, I hope it is you, the IT priestly caste, that wins, and not the beancounters.

As to a monopoly arising, this seems like, at first blush, a rather odd worry. The cloud, when properly implemented, shouldn't care what equipment is hung on the end of it as input or output devices. Operating systems (to the minimal extent that there are any) will have rigid interfaces with the cloud.

Other than that there's no lock-in at all: so we should have less prevalence of monopoly, fewer ways in which there can be a monopoly OS, or desktop environment, and even less possibility of a monopoly program (such as Word, Excel etc). If all inputs and outputs must conform to the (likely, browser) interface and what happens either side of it is a free for all, then how can there be a monopoly situation?

There could be an effective monopoly, sure, in the sense that someone, somewhere, has provided the best bit of kit to do a certain job – and so everyone uses it. However, there's no lock-in there, which is a necessity for a company to be able to set up a monopoly. And would it really be so bad if we all ended up using the best tool available for a particular job? But there just doesn't seem to be room in such an architecture for someone to be able to play, say, the Microsoft game of owning the desktop.

Except for one thing: data. The whole point of it all is that both the processing and the data sit off in the cloud – you don't know where and you don't care where. But, umm, what happens when you want to change your supplier for the storage or processing of your data? You need to know, absolutely, that you can retrieve everything that is yours and switch it elsewhere. You also want to make damn certain that no one else can get to your data, even if you do have a full copy.

Yes, I know, you've all already thought this through and have the necessary solutions, and I'm just worrying like an economist might. But if you thought that having to buy your kit or OS from someone who had you over a proprietary barrel was bad, just wait and see the pain that will come from having to cough up to someone who has all of your data tucked away somewhere. ®