Xeon and Opteron code? No problem

The updated SM10000-64 server card is still 5 by 11 inches, and it has four of the dual-core N570 processors, so you can't get twice as many cores in the box. You are still limited to 512. But what you really have are 256 server nodes that are basically twice as powerful with twice the memory scalability, and – here's the kicker – they that can run 64-bit code compiled for Xeon or Opteron processors. Here's what the Atom N570-based SeaMicro board looks like:

Feldman realizes that there is plenty of empty real estate on the new server board and says that the company just wanted to get support for this 64-bit Atom out the door fast to capture the market opportunity. Supporting only 32-bit Linuxes is an issue for SeaMicro's potential customers, since it forces a recompile. By the way, SeaMicro only supports Linux on the machines - just about any flavor you can name, include Red Hat Enterprise Linux and its CentOS clone, Debian and Ubuntu commercial distro were the ones that Feldman called out by name - but it don't do Windows.

Both the old Z530 and N570 server boards plug into the chassis using absolutely standard PCI-Express 2.0 x16 slots, as you can see in the photos above. 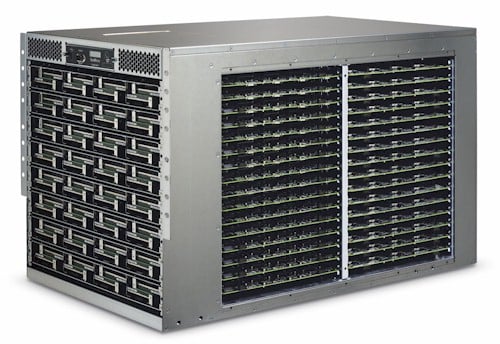 The original SM10000 chassis had 128 PCI-Express 2.0 x16 slots, arranged in eight vertical columns, four on the left and four on the right of the chassis. You plug in 32 boards (two columns of 16) on each side to get your 512 Atoms per chassis. The new N570-based boards plug into the chassis in exactly the same manner. The old boards supported an aggregate of 1 TB of main memory across its nodes, and that has not changed with the new N570 nodes; the difference is that the new nodes have 4 GB of memory each and there are half as many in the box. (It is not clear if the two styles of nodes can be mixed and matched in the same chassis.)

Feldman is not going to give away his product roadmap, but he is very enthusiastic about the Atom family, particularly now that it runs 64-bit code, supports virtualization, and offers more main memory per socket. But don't get the wrong idea. SeaMicro is watching all of the developments in the low-power chip racket.

"We built the system to support any CPU," Feldman tells El Reg, and say that the N570 is the best chip currently available for the SeaMicro servers in terms of performance per watt, bar none. "This is Intel's mantle to lose. They have to keep the crown."

Not for SeaMicro's sake, but for Intel's own sake. The SM10000 design can easily adapt to future x64 chips from Advanced Micro Devices (can you say "Bobcat?"), as could any one of a number of variants of the ARM RISC processor popular in smartphones, tablets, and netbooks. While supporting ARM will require customers to do a recompile, with Apple, Google, and Microsoft standing behind ARM chips, it is not possible to ignore them. Especially if the ARM chips offer substantial savings in terms of money and power consumption.

Feldman is not going to tell us how many boxes he has shipped or how much money the initial systems have generated, of course. But he did confirm that companies such as Skype. France Telecom, China Netcom Broadband, and Rogers Communications, as well as Mozilla and Oak Ridge National Laboratories, had the SeaMicro machines in production. The company has 75 employees and is adding a new one every week, and it has various managed hosting, cloudy infrastructure, and telcos that want to remain anonymous using its boxes as well. Feldman said that "tens of millions of Internet users traverse SeaMicro equipment daily," for whatever that is worth.

The real question is this: Has Google bought any of the new machines, and if not, why not? ®

Your top 5 liquid cooling quandaries answered, according to Omdia

Liquid cooling has its advantages, but it's not for everyone, says analyst
On-Prem13 Jul 2022 | 7