The iPad 2 – or whatever Jobs & Co choose to call it – is almost certain to be unveiled on Wednesday, judging from the not-so-subtle graphic used in the invitation for the roll-out event to be held in San Francisco. And already the buzzosphere is a-buzzing about the iPad 3 and an expanded MobileMe. 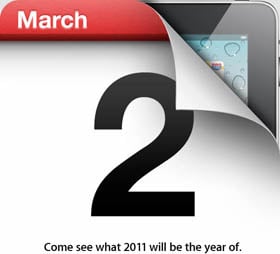 "For the iPad 2 don't get your hopes up too high," an anonymous Apple staffer told Cult of Mac. "They've had a number of problems along the way, and the third-generation iPad is the one to make a song and a dance about."

That third-generation iPad is rumored to appear this fall – perhaps as early as August or September – and some speculate that it could be powered by Nvidia's upcoming four-core Kal-El processor, a CPU/GPU mash-up that can support displays of up to 2560-by-1600 pixels.

The iPad's 9.7-inch display currently has a resolution of 1024-by-768 at 132 pixels per inch (ppi). Doubling that to 2048 by 1536 – well, quadrupling it, actually – would put its pixel density at 264 ppi. That's significantly below the 326 ppi of the iPhone 4's much-vaunted retina display, however. The Reg doubts, however, that Apple's marketeers will dub such a lower-density pixel-packer as a "macular degeneration display".

But the "song and dance" iPad 3 is, at minimum, half a year away. The iPad 2, however, is poised for unveiling just ... about ... now. What's more, one Italian website claims that the unveiling will be hosted by none other than Steve Jobs – or, as settaB.IT put it: "Domani Steve Jobs presenterà il nuovo iPad."

As is true with most every Apple announcement, the rumor mill has been grinding out a series of, well, rumors about the iPad 2, fueled by such pleasant silliness as Engadget spotting a pair of mockups at CES, the now-traditional multiple readings of case-maker tea leaves such as one by the wonderfully named Macgasm, and reports of an iPad duex attending the unveiling of Ruper Murdoch's lamentably lame iPad news rag, The Daily.

Let's indulge ourselves in a rundown of the major iPad 2 rumors to date, shall we?

Even if most of these rumors are correct, Cult of Mac's source would be correct in saying "don't get your hopes up too high." The improvements would be welcome, of course – especially, from our point of view, the lighter weight – but none would launch the iPad 2 into the OMG! category.

For that leap, apparently, we'll need to wait for the iPad 3 – or iPad HD, or iPad Pro, or iPad Optimus Prime, or whatever it'll be called.

In addition, the iPad 2 may not be the only announcement at Wednesday's event. Cult of Mac's source also said that Apple will announce that MobileMe will be expanded to allow you to store all your music, videos, films, and the like – well, at least the ones you've bought from Apple – in the Cupertinian cloud, accessible from everywhere on whatever iOS or Mac OS X device you may own.

It's our considered opinion that it's still a bit early for this service to be implemented, seeing as how Apple's $1bn megadatacenter is not yet up and running. As an Apple rep at the company's recent shareholders meeting said: "Apple's North Carolina data center is expected to open this spring, and will support the iTunes and MobileMe services."

That said, MobileMe packages have been disappearing from Apple's shelves, both physical and virtual. Perhaps Apple will announce on Wednesday that MobileMe is now free, thereby enticing fanbois to jump aboard in anticipation of an expanded MobileMe service becoming an all-content repository when the North Carolina datacenter goes online this spring.

See how easy it is to join the rumor-starting club? ®