Voxer is a walkie-talkie for the modern age, an iPhone app that lets you instantly talk across the interwebs and listen at the same time and leave voice messages if no one is on the other end and simultaneously chat with multiple people and toggle between text and voice to your heart's content. It's a real-time internet app in the extreme, and that's why it's built with a development platform most of the world has never heard of.

Matt Ranney and his team originally conceived Voxer as a two-way VoIP radio for the military, and he started coding in good old fashioned C++. "That's what you use for a serious, high-performance military application," he says. But C++ proved too complex and too rigid for the project at hand, so he switched to Python, a higher-level language that famously drives services at the likes of Google, Yahoo!, and NASA. But Python proved too slow for a low-latency VoIP app, so he switched to Node.

Node is what the developerati call Node.js, a two-year-old development platform specifically designed for building dynamic net applications. The "js" stands for JavaScript. Node is built atop V8, the open source JavaScript engine at the heart of Google's Chrome browser. But it's not a browser technology. Node moves V8 from the client to the server, letting developers build the back end of an application in much the same way they build a JavaScript front end. 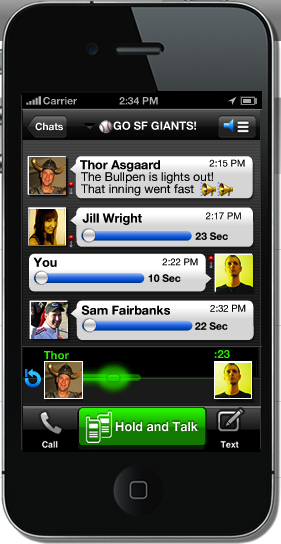 But that's only half the proposition. Node is also an extreme example of an "event-driven" system, a software architecture that's built around not threads or data but events: messages from other applications or inputs from users. In short, it doesn't wait for one thing to happen before moving to the next. If it calls a database for information, for instance, it can tackle the next task before the database responds. Whereas traditional multithreaded systems are suited to heavy CPU work, event-driven systems are meant for network applications that involve heavy I/O.

When a user connects from across the net, the Node "event loop" needn't preallocate a huge chunk of memory for whatever happens next. It allocates only a small slice of memory – a placeholder, if you will, that simply identifies the connection – and it grabs additional memory only as required.

This setup, Matt Ranney realized, is ideal for an app like Voxer, which requires unusually low latency with an unusually large number of open connections. "If you want to make something where the user gets a real-time update stream of some kind, you need to keep open a bunch of connections to the server. That's very expensive in, say, a PHP architecture. But in Node, it's nearly free. You can keep the connections open for a very long time, and the incremental cost per connection is very low," Ranney, Voxer's CTO, tells The Register.

"Node is the best of both worlds. We get JavaScript, which is uniquely suited to this kind of evented programming, but we get the performance too."

When he first built Voxer, Ranney ran a test to see how many connections he could open on a single server. "I just decided to open as many connections as I could, just to see where things would fall down," Ranney says. "With Node, I could open, well, all of them. I couldn't open any more connections without getting more IP addresses on my test machine. Node uses such small amounts of memory, it's astounding. I ran out of port numbers."

Next page: The New Everything
Page: