Well, The Reg freely admits that we're exaggerating a bit – but not by much.

Apple's COO and Jobsian stand-in Tim Cook said that he ranks the iPhone "just below food and water on Maslow's hierarchy of needs," according to a Forbes report describing Cook's meeting with an analyst from Bernstein Research, self-described as "Wall Street's premier sell-side research firm."

Food and water reside on the bottom tier of psychologist Abraham Maslow's famous Heirarchy of Needs pyramid. Although they share that Physiological Needs level with a number of other necessities of life, one popular version of the pyramid places sex right after food and water: 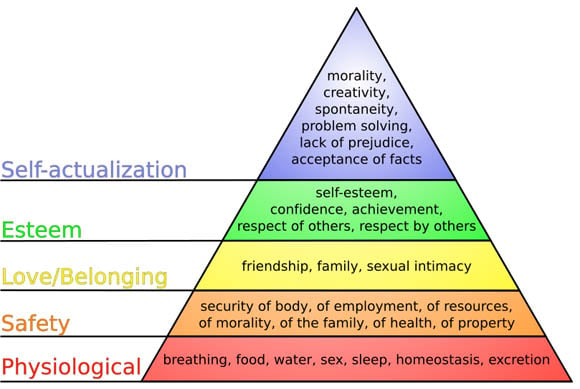 Cook was joking, of course – not terribly successfuly, but we rush to acknowledge that his attempt at humor far surpassed some of the zingers uttered by Google's soon-to-be-ex-CEO Eric Schmidt.

In addition to promoting the iPhone to the rank of a physiological need, Cook's talk with the analyst revealed a number of less-risible but more-important points – such as the implication that Apple is hatching plans for less-expensive phones.

According to Forbes, the analyst said that Cook "appeared to reaffirm the notion that Apple is likely to develop lower priced offerings," and "that Apple did not want its products to be 'just for the rich'."

Cook was also reported to have said that the iPhone created "the mother of all halos," increasing the visibility and desirability of Apple's entire product line. This effect, the analyst reported, is especially strong in emerging markets such as China, in which Cook said that Cupertino had spent "huge energy", and which he identified as a "classic prepaid market" for mobile phones.

Musings about emerging markets aside, The Reg will refrain from obvious and easy wisecracks about the iPhone's seductive powers among some established-market fanbois, powers that make it more sought-after than even the horizontal no-pants dance. ®