The new Watchkeepers will be somewhat enhanced over ordinary Hermes 450s, as they will possess ground-sweeping, man- or vehicle-tracking I-Master surveillance radar as well as electro-optical cameras. The I-Master draws on radar expertise from Thales' UK operations as well as its French roots. 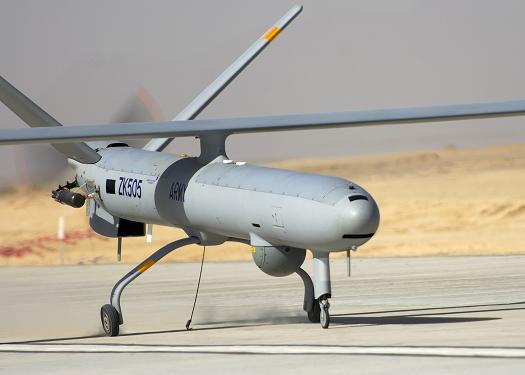 What's doing the job now. That extra bulge under the Watchkeeper is certainly taking a long time to stick on.

It seems quite clear that British Watchkeepers won't ever be armed, though Thales have exhibited mockup armed Watchkeepers at arms fairs. The UK craft, however, are intended for the Royal Artillery, which has two excellent reasons not to want them armed: firstly this would mean an almost certain turf grab from the RAF, and second an armed Watchkeeper would offer fewer opportunities for directing in strikes from mainstream artillery units. Furthermore it would cast doubt on the raison d'etre of the Royal Artillery's Fire Shadow prowler-bomb ("loitering munition") project.

For comparison purposes, the US Army intends to field a 132-strong fleet of its Sky Warrior roboplanes, modified and upgraded versions of the famous Predator which require no trained aeroplane pilot to operate them. These, like Watchkeeper, are equipped with radar and spyeye. They also carry Hellfire missiles (the same type used by British and US Apache attack copters), a favourite precision strike weapon widely used in recent and ongoing wars.

The Sky Warrior is being delivered now and its manufacturer says it has spare production capacity.

The US expects to pay no more than $7.5m per fully equipped Sky Warrior, as opposed to the UK's $27m, unarmed Watchkeepers.

Watchkeeper is supposed to be creating 2,000 jobs in the UK - for as long as the assembly lines run, anyway. It would be possible, alternatively, to buy 54 Sky Warriors which would be more powerful and cheaper to run (being part of a larger fleet, able to use many Predator parts). Then the 2,000 UK people could simply be hired at an average of £32,000pa to do nothing for five years, at least as long as the present UK workers will be kept in work by the Watchkeeper buy.

And we would still, in that scenario, have saved well over £300m toward the government's economy drive.

Meanwhile Watchkeeper is even further behind schedule, so our troops fighting overseas will wait even longer for their much-in-demand airborne spyeyes.

This project isn't about jobs or British industry or weapons for the armed forces. What it's mainly doing is pumping hundreds of millions of pounds into French and Israeli arms companies. ®