ISSCC Intel has released some additional about its future eight-core "Poulson" Itanium processors.

The Poulson chips are the first Itaniums to have a new microarchitecture and core redesign since the "McKinley" cores a decade ago. As previously reported, the processor has a total of 3.1 billion transistors and is implemented in Intel's current 32 nanometer wafer baking technologies, which includes strained silicon.

The Poulson chip is 18.2 by 29.9 millimeters (544 square millimeters) and has about 20 per cent less die area than the quad-core "Tukwila" Itanium 9300 chip it will eventually replace in the lineup probably in early 2012 if Intel can stick to the two-year cadence is it trying to set for the Itaniums so Hewlett-Packard, the last big user of the Itanium chips, can keep pace with Power and Sparc upgrades.

El Reg was missing a whole bunch of information about the Poulson chip when Intel gave prebriefings ahead of the ISSCC event, but Reid Riedlinger, the chief chip engineer for the processor, filled in some gaps in his presentation at ISCCC. For one thing, Riedlinger's presentation had die shots that showed a lot of the salient features of the processor, which Intel did not provide in its briefings to the press.

So, here is what the Poulson chip looks like: 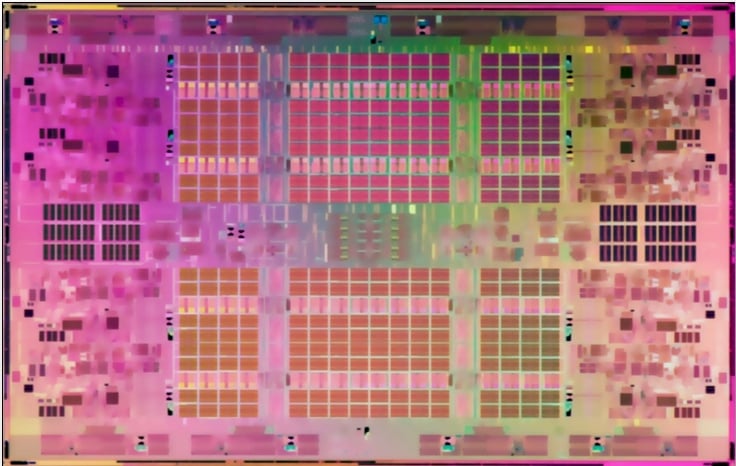 Like the future "Sandy Bridge-EP" and "Westmere-EX" Xeon processors from Intel, which El Reg told you all about here from ISSCC, the Poulson Itanium chip is a "cores-out" design, which means that the cores are on the outside of the chip with the shared L3 caches occupying the center of the chip.

The QuickPath Interconnect (QPI), which allows point-to-point communication between processors in adjacent sockets in a system board and across multiple systems boards in an SMP server, run along the top, and the Scalable Memory Interconnect (SMI) DDR3 memory controllers and buses run along the bottom. Here's a slightly better Poulson chip schematic than Intel was handing out in its prebriefs: 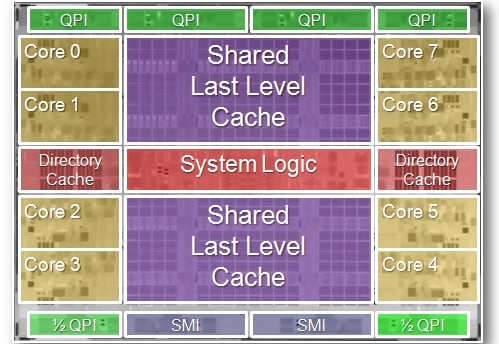 Riedlinger gave out the transistor budget for the Poulson chip, which was interesting. About 712 million of those transistors are for the cores themselves, with the remaining 2.44 billion going for the uncore portions. Most of that is, as you can see from the chip shot, used up in the shared L3 cache, which is segmented in 4 MB blocks (one per core) and linked together by a high-speed, bi-directional ring interconnect.

Next page: The funny bit
Page: