Although Android-based smartphones now have a larger US market share that do handsets from Apple or RIM, the three-way battle remains a tight one.

"When it comes to consumer marketshare by operating system, Android (29%) appears to be pulling ahead of RIM Blackberry (27%) and Apple iOS (27%)," a Nielsen survey released on Thursday reports.

But there's a big, fat "but" sitting in the midst of the Nielsen data. "But an analysis by manufacturer shows RIM and Apple to be the winners compared to other device makers," the company continues, "since they are the only ones creating and selling smartphones with their respective operating systems." 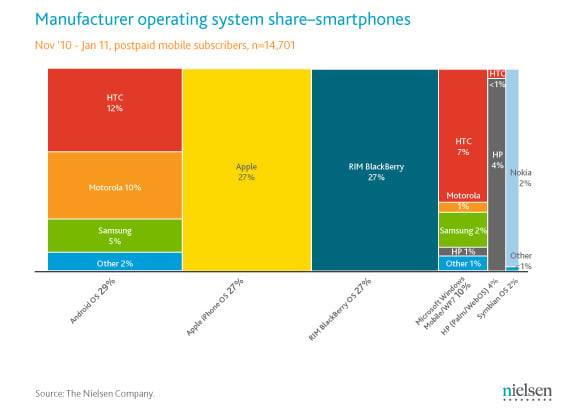 Of the other smartphone handset makers, HTC accounts for a wee bit over 17 per cent of sales, and Motorola 11. If you're a Nokia fan, don't even ask – okay, we'll tell you: the Finns weigh in at 2 per cent.

But bear in mind that Nielsen's figures are for the US only. In Europe, Apple's iOS holds a comfortable lead, but Nokia's SymbianOS holds a market share of well over 10 per cent – although it's declining as Android rises.

In the UK, RIM and Apple are battling for number one, while Android remains far behind. But Blighty does agree with the Eurozone on one trend: Android is rising while SymbianOS declines. 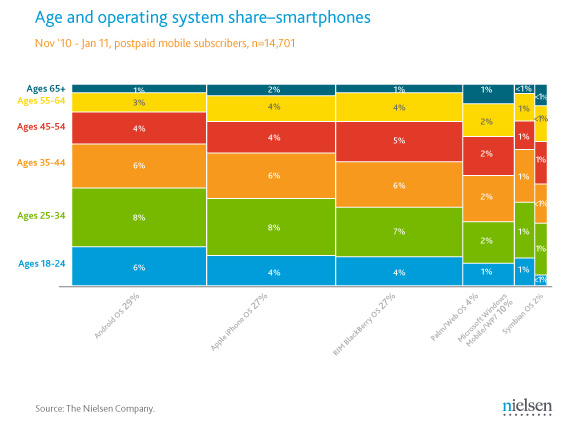 The only "by much" stat that Nielsen discovered was the worrying discovery – worrying to Nokia, that is – that the aftermentioned YoA™ have little or no use for SymbianOS.

To be sure, there's a lot of smartphone market to go around. During his iPad 2 rollout pep talk yesterday, Steve Jobs bragged that Apple had recently sold its 100-millionth iPhone. IDC has noted that smartphones had rapidly become the computing device of choice for Mr. and Mrs. World+Dog, having outsold PCs for the first time during the fourth quarter of 2010.

Phones running Android can continue to tussle with Apple and RIM's offering for number-one bragging rights, but the truth of the matter is that the pie is growing, and that all three of the big players are getting fat – or fatter – thanks to overall smarphone market growth.

If Nokia can get its Windows Phone 7 act together – fast – it might have a chance to grab its rightful share of the pie, and let SymbianOS slip off into a well-earned retirement. ®